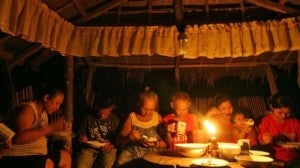 MANILA, Philippines—The provinces of Davao del Norte and Compostela Valley could soon face blackouts due to an impending disconnection as the Davao del Norte Electric Cooperative, Inc. (Daneco) that has been serving them has failed to settle obligations of more than P500 million, the Power Sector Assets and Liabilities Management (Psalm) Corp. said.

“After exhausting all possible remedies, Psalm has issued a final demand to Daneco for failure to comply with its financial obligations, and the period to comply with such final demand has already lapsed on March 21, 2014,” Psalm president and CEO Emmanuel R. Ledesma, Jr. said in a statement.

Ledesma said the issuance of the notice complied with existing regulations. These include the failure of a customer, as to this case of Daneco, to comply with its financial obligation with Psalm under their power supply agreements or any existing contracts for the supply of electricity and restructuring agreement.

When the power accounts were transferred from the National Power Corporation to Psalm in June 2009, Daneco’s outstanding obligation amounted to about P230 million.  In March 2011, Psalm approved the restructuring of Daneco’s outstanding Value Added Tax (VAT) account amounting to more than P106 million, with a monthly amortization of more than P4 million for a period of two years or from March 2011 to February 2013.  While the electric cooperative fully settled its VAT obligation, it has failed to fully settle its monthly power bills (PB) starting July 2012.

Based on representations of Daneco, its operations starting June 2012 have been affected due to the legal dispute between Daneco-National Electrification Administration (NEA) group and Daneco-Cooperative Development Authority (CDA) group, and the effect of typhoon Pablo in Davao del Norte and Compostela Valley – the areas being catered to by Daneco.

In June 2013, Psalm and Daneco-NEA entered into an agreement for the three-year restructuring of Daneco’s outstanding obligation amounting to P275 million as of March 31, 2013. The monthly amortization of Daneco was set at over P8 million covering the months of May 2013 to April 2016. Daneco-NEA is religious in paying this monthly restructured amortization.

However, Daneco continued to incur unpaid PB for the reason that while Daneco-NEA group was dutifully paying Psalm for its PBs, the Daneco-CDA group’s payment is not up-to-date as the last was made in December 2013.