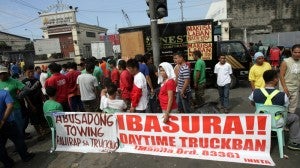 MANILA, Philippines–Should the aims of a city ordinance prevail over the greater national interest?

This was the question asked by Caloocan Rep. Edgar Erice in a privilege speech assailing the truck ban imposed on some major roads by the Manila city government since February.

Erice said city councils should not pass ordinances that adversely affect the national economy and the welfare of the majority.

He asked that the House committees on local government and on Metro Manila development look at ways to resolve the matter.

“If all cities like Manila issued a similar ordinance, the result would be the collapse of the Philippine economy,” Erice said.

He said the city government of Manila should have first exhausted all options to improve traffic and road access “before limiting the flow of the economy.”

The truck ban has been blamed for contributing to the slowdown of the economy, which posted a lower-than-expected 5.7-percent expansion in the first quarter.

Erice noted the cargo trucks that traverse Manila’s streets were vital to the speed of business and, thus, the pace of economic growth.

Erice has filed House Bill No. 712 seeking the creation of a special metropolitan political subdivision in the National Capital Region to be called the Metro Manila Regional Administration and vested with powers to tackle the gargantuan problems of one of the largest metropolises in the world in terms of population.

“This is only reasonably called for to improve the present state of governance in Metro Manila,” Erice said.

Since the hasty implementation of the truck ban ordinance, it has disrupted the transport of goods and prevented domestic businesses from abiding by their international shipping contracts, he said.

He said the trucks that transport goods through Manila’s streets are a small fraction of the traffic in the city.

He said the bigger causes of the heavy traffic are lack of roads and poor traffic management that the city government should address instead.

Erice said the increase in the number of cargo trucks on Manila streets was a positive sign the economy was growing while the lack of roads and traffic management were negative signs resulting from government inaction.

“As such, I cannot understand why the focus of the ordinance is the positive factor and not the negative causes of the worsening traffic situation,” he said.

He said the Manila city government could explore other options to speed up the flow of vehicles, like clearing R10 road which stretches from Tondo to Caloocan City, removing street obstructions like vendors and coordinating road repairs.

He said several open areas along R10 could be used for parking trucks, earning revenue for Manila while solving the problem of trucks parked on city streets.

Michael Wan, an economist at Credit Suisse, said the forecast of 7-percent growth this year had been put at risk, especially with the recent rise in Japan’s value-added tax—which could hurt demand for Philippine exports—and the limits placed on trucks in Manila that has forced some factories to cut production.

“If we are right about these two drivers, production and export activities will likely remain subdued in Q2, and perhaps beyond,” Wan said.

Henry Schumacher, vice president of the European Chamber of Commerce of the Philippines, said that while trade growth had been relatively flat year on year, the port utilization rates had become unsustainable with the continued implementation of Manila’s truck ban.

“All buffer areas continue to fill up and the newly created truck holding areas are now being utilized for container storage because of customers’ inability to pull out containers due to a lack of consistent truck turnaround,” he said.

Schumacher said that despite the fact that facilities were being developed to substantially handle more cargo, the truck ban had effectively reduced the country’s growth potential and was damaging the economy.

Drastic and unsustainable operating decisions may have to be taken to further mitigate the impact of the truck ban and keep cargo moving, he said.

“These decisions may include limiting or refusing to accept some types of containers, implementing penalties and barring any cargo that does not meet the strict deadlines that will have to be put in place. Despite this and as the peak season approaches, no measures will be good enough to limit the mid- to long-term effects of this ban on the economy,” Schumacher said.

The truck ban will adversely impact the second quarter GDP [gross domestic product], which might even fall below the 5.7-percent disappointing growth in the first quarter, warned Philippine Chamber of Commerce and Industry president Alfredo Yao.

“Hopefully, the problem will be resolved so we can have a better third quarter GDP,” he added.