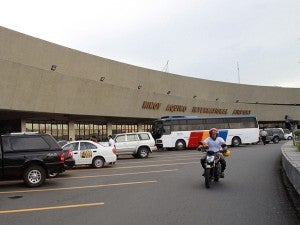 MANILA, Philippines—Not just passengers’ frayed nerves but the bottom lines of airlines operating in the country’s premier gateway are also suffering from the horrors of air traffic congestion.

The airlines have been incurring losses of more that P7 billion a year from the massive fuel expense because of the worsening congestion at Ninoy Aquino International Airport (Naia), said deputy director general John Andrews of the Civil Aviation Authority of the Philippines (CAAP).

Planes unable to immediately land, for example, would need to burn extra amounts of fuel, he said.

Andrews estimated that about 200,000 to 400,000 kilograms in additional fuel are expended as a result of the congestion, or P10 million to P20 million a day, by the airlines.

Airlines incur close to P3.7 billion a year in added fuel expenses and lose another P3.7 billion from “engine costs and cost of aircraft time,” he said.

For this reason, the airlines are supporting a plan to construct a second parallel runway for Naia, where capacity at its sole primary runway has been struggling to keep up with increasing demand for air travel, Andrews said.

According to Andrews, the second runway, at about 2,300-meters long, is shorter than the 3,400-meters primary runway. But its completion will allow a 50 percent increase in take-off and landing events to 60 per hour from the existing 40, he said. It is estimated to cost P2 billion.

“I think I have already convinced Department of Transportation and Communications (DOTC) Secretary [Joseph Abaya] that this is the only option available to us,” Andrews said.

Abaya earlier said that a key issue was the expropriation of land, involving about 600 homes of squatters and private homeowners, but Andrews said this would not be a major issue for the government.

“This can easily be done with the proper political will,” he said.

Andrews said CAAP did not expect that there would be any compliance issues with international air safety bodies like the International Civil Aviation Organization (ICAO).

“It is already ICAO compliant. There are no major problems or issues we cannot mitigate,” said Andrews, who was part of the team that played a key role in getting Philippine air safety upgrades from the United States and Europe.

Abaya had said in a previous interview that he supported a second parallel runway in Naia as it would be a faster fix than long-term proposals, which include building a new international airport.

Abaya said it was unlikely for any new international airport serving Manila to start construction by the time President Aquino steps down in 2016.