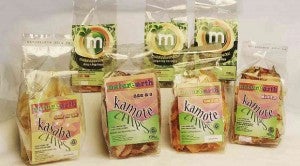 BEST SELLERS: Nutritious munchies are minimally processed and made with wholesome ingredients. Photo by Nelson Matawaran

Like most people living in the fast lane, Corazon “Zonito” Torrevillas-Tamase was eating convenience foods with low nutritional value and high in additives.

From one medicine a day, she took eight kinds of pills for diabetes and hypertension.  Yet, she always ended up in the doctor’s office or the hospital.

Searching for alternative cures, she read up on moringa olifeira (malunggay) which is potent with iron, protein, potassium and beta-carotene.   Since she couldn’t eat several malunggay bundles per meal,  Tamase then boiled the leaves and  made a brew. After drinking it twice a day for several months, test results showed significant improvement in her blood sugar levels. Consequently, the doctor removed all her medications and said she was doing something right.

Today that brew is one of her products in her natural food business, Nature Earth.

Inspired by the cure, Tamase experimented with malunggay buns.  More than 10 years ago, she worked as public relations manager in McDonald’s Philippines and director of the  Ronald McDonald’s House of Charities.  Using her bonus money, she commissioned a bakery to produce malunggay buns for a nutrition program in E. Rodriguez public school in Mandaluyong.  The authorities had identified 60 students who were anemic. Only one out of  the 60 refused to eat the  malunggay bun. After 45 days, the children showed  normalized levels of iron while the lone student remained malnourished.

Tamase  points out that bread with half a teaspoon of moringa powder, which is the  body’s minimum daily requirement, usually turns green. She warns that while some bakeries promote “healthy malunggay breads, “they are just flecked with malunggay flakes or given green food coloring.

Tamase says she’s always been entrepreneurial.  Since childhood, she would produce yema candies and sell them in school.  Recalling her mother’s  sugar-coated peanuts business in Misamis Oriental,  she tweaked the family recipe by adding malunggay powder for nutrition. With a capital of P200 for two kilos of peanuts, she produced enough 200 packs which were sold at P5 each in public schools.  Soon she got bulk orders for 300 to 1,000 packs for the canteens.  In one month, Tamase earned P80,000.

One teacher, who was lactating, reported that she gained more breast milk every time she ate the malunggay-infused peanuts. One of malunggay’s benefits is increased breast milk production.”

In 2011, Tamase and her husband Franz Josef, took a leap of faith by starting Nature Earth.

“We couldn’t get a loan from the bank because we had no collateral  or business history. We just got a loan from those text messages. My husband and I checked out this company,” she recalls.

Using their van as a guarantee, they got a loan of P280,000.   To develop their malunggay concentrate for the market, Tamase sought help from the  Department of Science and Technology. 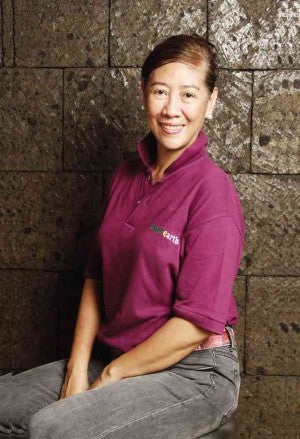 ZONITO Tamase founded a business not just to offer healthy foods but to promote a healthier lifestyle. Photo by Nelson Matawaran

Although DOST recommended additives for body and flavor to the tea,  Tamase instead discovered an extract from okra which became a natural thickener, and added ginger for flavor. The formula is now patented.

“I’m pushing for this because the Malunggay Concentrate contains phytonutrients. We get our malunggay from the mountains in Bacolod. If you get malunggay in polluted places, it will contain lead which doesn’t get destroyed when you boil it.  The malunggay has to be free of toxins,” says Tamase.

Since chips were also a popular  snack food, Franz Josef suggested making them out of tuber and cassava and flavored with cheese and sour cream. It is now Nature Earth’s best seller.

Tamase  points out that free tasting in the stores is the best marketing. “People won’t walk away with a pack of your products if they don’t know what it’s about,” she says.

Tamase also adopted the guyabano tea produced by her aunt, columnist Domini Torrevillas.  At this writing, Domini’s Guyabano Tea is under application for Food and Drug Administration approval.

Nature Earth products are  distributed in the Panay Booth at Market! Market!,  Greenhills flea market and the weekend markets in SM Manila, SM  Mall of Asia and SM Cubao.

SM has maintained the tradition set by taipan Henry Sy of prompt payment of suppliers. “One good thing about SM is that we get paid the following week. It takes care of our capital and we have a regular cash flow,” says Tamase.

To augment the income, she  also marketed her products to Echo Store, Raffles-Fairmont and Sugarleaf.  One day, she got a call from the food and beverage director of Sofitel. The managers took a taste test of the camote-cassava chips and voted that it be served in the hotel.  It was one of the hotel’s ways of helping out local businesses.

It  has taken the couple three years to be stable in the business. At the start, they would manually slice the camote and cassava chips. When they earned more, they bought a machine.  Today, they produce  2,500 packs a week.

The Tamases oversee a staff of 21 who are given minimum wage and benefits, fed and housed in the factory.  Nature Earth’s sellers are given food, transportation allowance and incentives if they exceed the sales target.

“I grew up in a business environment. My grandmother Corazon Torrevillas always took care of her employees. I do the same here,” says Tamase.

She adds that she also applies her learnings at McDonald’s Philippines. “McDonald’s is precise in quality control and pays attention to details. It knows how to instill discipline in employees. The company  is also generous in giving back to the community. When you adapt these corporate standards, you get to do the business right.”

Tamase notes the importance of the endorsement from the  Food and Drug Administration of the Philippines. “All the hotels and retail establishments ask for the certification. When we got out FDA approval, our business  took off. It takes time to document the nutritional facts and get results from the microbiological tests. The hotels come to the factory site to accredit you. If you don’t meet the standards but they see your potential, they help  out by enabling you to attend seminars.”

In all, she credits her faith in God for Nature Earth’s success. “My formula is to be focused, be consistent, pray hard and share.”