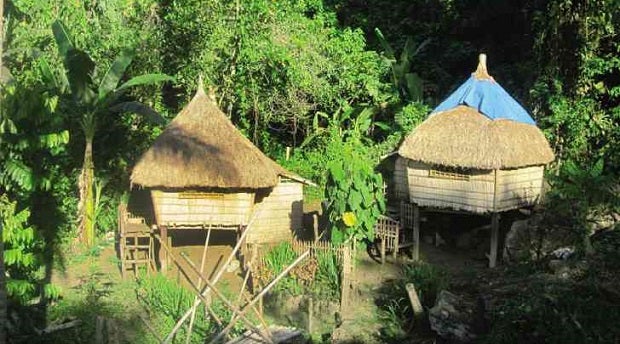 Meet Leo Banaag, 34, single, a member of the Iraya Mangyan tribe in Mindoro. He studied in La Trinidad and holds a bachelor’s degree in agriculture from Benguet State University. 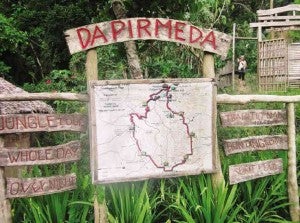 Upon graduation he worked for a time as an NGO community organizer in Puerto Galera, the top tourist destination in Oriental Mindoro, and then in San Teodoro, known for its whitewater rafting and kayaking, and Baco in Mt. Halcon, which straddles the boundaries of Oriental and Occidental Mindoro.

Leo has been involved in the processing of the Mangyans’ ancestral domain, advocacy networking, and supervising nonformal education for the nonliterate members of his tribe.

In 2009 he was invited to go to Japan by a Japanese NGO, Genesis, to share his experiences. And that was when he got the idea of constructing Da Pirmeda (a Mangyan word  meaning “the first”) an oasis and ecohaven in Mt. Baclayan, Puerto Galera. 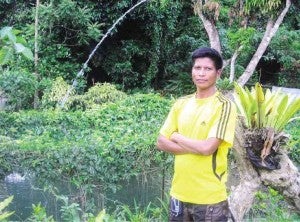 Leo was able to save money thanks to all his activites, being unmarried and, according to him, having no vices (“walang asawa, walang bisyo”)—to the tune of P70,000. Add to that the travel allowance of P43,000 which he was able to save from his all-expenses paid Japan sortie.

With this as seed money, he set to work in 2010 on building his dream mini resort.  “The first step was to construct the two cold spring swimming pools with continuous running water,” says Leo. This was done bayanihan style, meaning he called upon the muscle power of his nephews and other relatives. 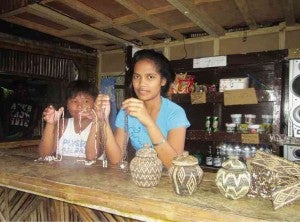 Then they built three native houses, using traditional materials from the mountains. “I only spent for the nails,” observes the intrepid Mangyan.

There was a need for more sturdy accommodations for some foreign guests. So a Canadian friend invested P50,000 here, resulting in three concrete rooms.

A kind of assembly hall and a sari-sari (variety) store, which along with the usual snacks and canned goods, sells Mangyan fashion accessories and home decor, complete the picture. And Leon tells the children to further hone their talent in traditional Mangyan dances to generate income from visitors. 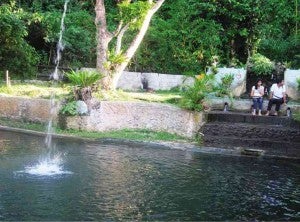 Da Pirmeda has a truly refreshing ambience, with a grand view of Puerto Galera Bay 2,000 feet below.  It is surrounded by greenery and a thickly-forested area, albeit second growth, as it used to be a communal farm. Traditional meals are sold here at budget prices (P50-P70, unlimited): root crops like camote, ube, gabi and native vegetables, washed down with fresh coconut juice straight from the trees.

Each hut costs P250 a day and accommodates two to three persons. The three rooms are priced at P450 per, for 24 hours. A two-day jungle trek, covering an area of 37 kilometers, can be had for P3,800, while survival skills training will cost you P500. 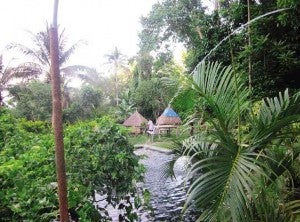 The entrance fee to Da Pirmeda is P250. You can stay four hours, overnight or several days if you wish, as long as you pay for each day. And Leo is even now constructing jungle trails for senior citizens, at P250 per trek.

To get to Da Pirmeda, you have to rough it a bit. The resort is accessible from the town center by mountain bike or jeepney, through trails which are both well-paved as well as dirt roads, with ravines on the side.

Leo has promoted his place through Facebook and tourist friends and Da Pirmeda has attracted European tourists, mostly Danes and Britons. But things may change now, with the LGU-Tourism Information Center ([email protected]) promoting the resort, along with other attractions in Puerto Galera. The tourism office recently invited national media persons who attended the De Galera Festival to tour Da Pirmeda.

The Mangyan entrepreneur expects to recover his investments in 2-3 years but cannot promise this because the place makes money only during the summer months.