Carnegie: Business success is about ‘a new way of life’ 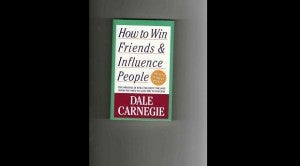 It is the book that puts to shame all the Dr. Phils and self-help books combined. It is the “bible” on effective speaking and “the fine art of getting along with people.” It is a must-read for today’s business and government leaders, executives and managers whose job is to lead and motivate people, win them to their way of thinking, and change negative behaviors, thus spurring business success.

It’s the classic, immortal bestseller by Dale Carnegie—How to Win Friends and Influence People—published in 1937 but which has remained relevant and important to this day, an age in which tempers flare when people are in a fix!

Human relations, unlike fads and political ideologies, will never go out of “style.” As revealed in the book’s introduction, studies at the Carnegie Institute of Technology showed that “even in such technical lines as engineering, about 15 percent of one’s financial success is due to one’s technical knowledge and about 85 percent is due to skills in human engineering—to personality and the ability to lead people.”

Carnegie dishes out time-tested advice in the first part of his book as to “the big secret of dealing with people.” He delves into the psychology of people’s deepest desire to be important (read: to be recognized and appreciated). Far from suggesting flattery or treating people, especially employees, with kid gloves, he talks about “a new way of life.”

He says we ought to “stop thinking about ourselves for a while and begin to think of the other person’s good points.” So, it behooves leaders to recognize and appreciate their colleagues, employees and reports, and follow these two fundamental principles: “Don’t criticize, condemn or complain” and “radiate a little happiness and pass on a bit of honest appreciation.”

The kindness Carnegie talks about relates to leaders’ ability to subtly express what’s on their mind even when they know they are in the right. This may well apply to handling employees and customers. If you tell people they are wrong, he says, you have struck a direct blow at their intelligence, judgment, pride and self-respect. “That will make them want to strike back. But it will never make them want to change their mind,” he writes.

Carnegie then suggests these “magic” phrases: “I may be wrong. I frequently am. Let’s examine the facts.” Quite a disarming approach. He says that by the time the customer vents his feelings, he is usually much more reasonable as regards settling the dispute. But it is important to admit one’s mistake quickly and emphatically, he points out.

He also describes how someone in authority can give orders not by directly saying “do this or do that” or “don’t do this or don’t do that” but by asking questions instead. His suggestions: “What do you think of this?” or “is there anything we can do to handle this order?” or “is there any way to adjust our hours or personnel assignments that would help?” or “can anyone think of different ways to…?” Result: Employees will approach the problem with a “can do” attitude.

The other act of kindness Carnegie speaks about deals with something that would stop arguments and create good will: “I don’t blame you one iota for feeling as you do. If I were you I would undoubtedly feel just as you do.” An answer like that will soften the most cantankerous old cuss alive, he writes.  His book is not only informative and enlightening—it’s quite entertaining as well!

The book relates life-changing experiences of grouchy, inept executives who have “interiorized” a new philosophy in life ruled by kindness, empathy and encouragement of people around them, propelling their organizations to a new kind of teamwork and loyalty.

They swore they had found far more happiness in their business and in their personal lives. It is replete with practical applications, stories and anecdotes whose lessons everyone can relate to. Any way one reads it, the book is a gold mine of knowledge and a winner!

Carnegie advises those reading it for the first time to have a deep desire to master the principles of human relations and apply them at every opportunity. He himself calls it an “action book” as he quotes the 19th century English philosopher Herbert Spencer who said that “the great aim of education is not knowledge but action.”