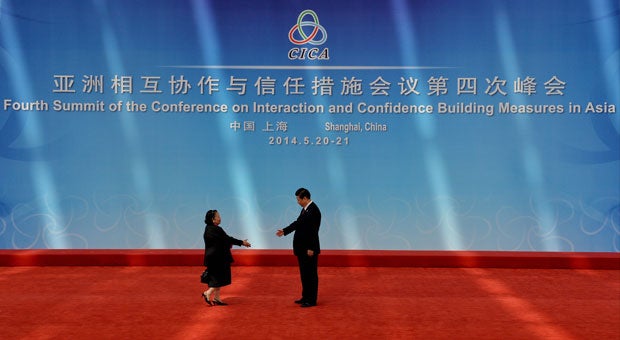 Philippines Ambassador to China Erlinda Basilio, left, is greeted by Chinese President Xi Jinping before the opening ceremony at the fourth Conference on Interaction and Confidence Building Measures in Asia summit in Shanghai, China, on Wednesday, May 21, 2014. China’s absence in Manila has cast a shadow on the ongoing World Economic Forum on East Asia being hosted by the Philippines. The little-known security forum in Shanghai is seen to be China’s platform to show its willingness to work with her wary neighbors. AP PHOTO/MARK RALSTON

MANILA, Philippines—Several of Asia’s most powerful men and women are converging in Metro Manila this week to take part in discussions that will help shape the region’s future, but a giant dragon is casting a shadow on one of the continent’s brightest spots.

For participants to this year’s World Economic Form (WEF) on East Asia—being held in the Philippines for the first time as a reflection of the country’s rising prominence—one glaring no-show cannot be ignored: China’s.

“Their absence is noticeable for me. They aren’t present in any big way,” said Rajiv Biswas, chief economist for the Asia-Pacific at IHS, a US-based think tank. “There are a couple of [Chinese] companies here, but it’s not a substantial presence,” he said in an interview Tuesday night.

China’s snub, he said, might serve as a harbinger of worse things to come. The largest economy in Asia—and the world’s by 2021, according to IHS—ironically may also become the continent’s biggest hurdle to development.

Biswas said geopolitical risks as a result of territorial disputes between China and several of its neighbors, the Philippines included, clouded the WEF agenda.

China has claimed “indisputable sovereignty” over most of South China Sea (locally called the West Philippine Sea), including areas the Philippines, Vietnam, Indonesia and Malaysia, among others, say are theirs.

Already, the issue of China was on top of the agenda at the scheduled meeting this week between President Aquino and Vietnam’s Prime Minister Nguyen Tan Dung, who is in town this week for the WEF.

Earlier this month, state-owned China National Offshore Oil Corp. (CNOOC) placed a deep sea drilling rig in an area both Beijing and Hanoi claim as theirs. This triggered violent anti-Chinese demonstrations in Vietnam that have left two Chinese workers dead and factories damaged.

The Philippines last March brought China to court, questioning the validity of the latter’s Nine-Dash Line claim before the United Nations.

Meanwhile, Japan, according to reports this week, said it would set up military posts on the Senkaku Islets that are also claimed by China.

“China is the common denominator in these issues,” Biswas said.

China’s importance to the region as a whole cannot be understated. In 2012, foreign direct investments to Asean from China reached $4.34 billion, or 6.7 percent of the total. China’s share of Asean’s total trade was 12.9 percent, beating Japan, the European Union and the United States. In the same year, 9.2 million Chinese tourists visited Asean countries, making them the region’s largest market for visitors.

In Vietnam, Biswas said investments from China were expected to dip as its companies mirrored Beijing’s more assertive stand. Vietnam’s tourism sector, one of the main drivers of its economy, is also expected to take a hit. Last year, 1.9 million of Vietnam’s 7.5 million tourists were from China, official data showed.

In 2012, the travel and tourism industry employed 3.8 percent of Vietnam’s workforce. Including wider effects from investments and the supply chain, the proportion grows to 8.1 percent.

China’s tourism administration this month issued a travel warning for its people, saying visits to Vietnam should be “carefully considered.” The warning also called on Chinese tourists to “raise their consciousness of danger,” according to a report by Singapore’s Straits Times.

The Vietnam National Administration of Tourism (VNAT) has already pledged to help protect Chinese tourists amid rising tensions. “People in Vietnam wouldn’t want to go to China. It’s the same with the Chinese. They wouldn’t want to visit Vietnam,” Biswas said.

Spats between China and several members of the Asean come ahead of the 10-nation bloc’s aspiration to integrate into a single economic unit starting next year.

Biswas said Asean’s relationship with China was vital if East Asia as a whole was to achieve the economic gains it sorely needed to lift millions of its citizens still mired in poverty.

The opportunities for economic cooperation between the increasingly important Asean bloc and its larger neighbor were immense, policymakers said.

If taken as a single country, the Asean bloc is the third-largest in the world in terms of population with more than 600 million people—dwarfed only by China’s 1.35 billion and India’s 1.24 billion.

Finance Secretary Cesar V. Purisima earlier this week noted that Asean was one of the world’s fastest-growing regions. In 2012, the region’s $2-trillion economy grew by 5.8 percent, accelerating from 2011’s 4.8 percent. In the same years, the global economy expanded by just 2.9 and 3.9 percent, respectively.

In 2013, Asean’s 10 members were able to attract more foreign direct investments (FDI) than China for the first time in history, Purisima noted.

The region also leads the world in several areas. Asean is the world’s top exporter of electronics and the second-largest manufacturer of garments next to China. The 10 countries also attracted more foreign visitors than France, the world’s leader in tourism.

International Monetary Fund (IMF) deputy managing director Naoyuki Shinohara said Asean, strong as it is, stood to gain even more if harmony with China could be attained.