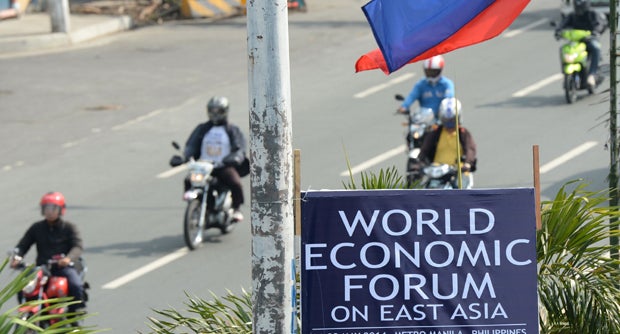 Motorists speed past a signage of the World Economic Forum on East Asia displayed along a street near the airport in Manila on Wednesday, May 21, 2014. The Philippines on Wednesday welcomed hundreds of business chiefs and government leaders for Asia’s edition of the WEF. AFP PHOTO/TED ALJIBE

MANILA, Philippines—A “bright spot” was how President Aquino described Wednesday the Philippines to some of the region’s most powerful business leaders, as he seized the occasion of the World Economic Forum on East Asia (WEF-EA) to detail the strides taken by the country under his watch.

Just before the start of the three-day forum—considered to be the Philippines’ coming-out party on the global stage—Aquino said the country was “poised on the edge of even more meaningful progress,” and urged foreign business leaders to take advantage of the country’s economic resurgence.

“The transformation of the Philippines is a collective achievement, built on the shoulders of a people prepared to undertake the difficult task of reform together,” he told members of the members of the Asean Business Club (ABC) who paid him a courtesy call in Malacañang.

The Philippines is host to the WEF-EA, commonly known as “Asia’s Davos,” in reference to the World Economic Forum’s annual global gathering in Switzerland.

About 600 political and business heavyweights from Asia and beyond started to gather Wednesday at the glitzy financial district of Makati for the event, which would focus on sustainable and equitable growth for Asia’s dynamic economies.

In Malacañang, President Aquino described to the business leaders how the local economy’s “strong domestic demand” served as “another indication of the potential that investors see” in the country.

“The Philippines has consistently bucked the global trend, with economic growth remaining high, and even surpassing our targets,” he said.

“This is partly because … external volatility and subdued global demand has not affected the country, since we are neither resource-dependent nor export-oriented.”

Aquino also trumpeted his administration’s “commitment to good governance, strong macroeconomic fundamentals, and the credit-rating upgrades we have received from all three major credit rating agencies, placing us at investment grade or higher.”

“The success story of the Philippines thus far is proof positive that, with the desire to uplift our fellowmen, and the dedication to work alongside each other, we can reach greater heights,” Aquino told the Asean Business Club, which counted 45 members as of December last year.

“No longer are we the ‘Sick Man in Asia.’ We are now Asia’s bright spot—a viable destination for investments and tourists.”

“Whereas more people are empowered to take hold of opportunities opening up in society, the engines of growth then shift constantly toward higher and higher gears,” he said.

The President is set to deliver a message during the opening of the plenary session of the 3rd WEF-EA at the Shangri-la Hotel in Makati on Thursday (May 22).

Vietnamese Prime Minister Nguyen Tan Dung and his party arrived around 12:30 p.m. on a government aircraft at Villamor Air Base in Pasay City.

Vietnam’s prime minister was expected to hold a dialogue with President Aquino on improving cooperation toward peacefully resolving disputes in the South China Sea.

Ambassador Truong Trieu Duong on Wednesday said the Vietnam leader would also discuss the recent standoff sparked by China’s deployment of an oil rig near the disputed Paracel Islands.

Malacañang spokesman Edwin Lacierda said the meeting of the two leaders should not be taken as a budding alliance against China. He added that the two sides would also discuss economic cooperation, trade and tourism.—With reports from AFP and AP