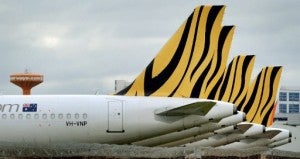 MANILA, Philippines—Tiger Airways Philippines is seeking regulatory approval to fly to South Korea, the Philippines’ No. 1 source of tourists, a filing with the Civil Aeronautics Board showed.

Tiger Airways Philippines, a unit of dominant budget carrier Cebu Pacific, said in a letter to the Civil Aeronautics Board that it was applying for designation as official Philippine carrier to Korea.

The CAB was set to decide on the application on June 12, the letter showed. Ahead of this period, parties opposing the application could make the appropriate filings, the CAB added.

Expansion to South Korea was only made possible recently when the US Federal Aviation Administration restored the Philippines’ category 1 status after it had complied with international safety standards. The restriction that the United States used to bar domestic carriers from expanding their operations had also been adopted by the North Asian economy.

Tiger Airways Philippines’ application comes as the country is looking to potentially amend an existing air deal with South Korea on expectations travel between both countries would increase.

A total of 220,831 South Korean tourists visited the Philippines in the first quarter, accounting for almost 25 percent of all inbound traffic, the Department of Tourism said. This was higher than the 131,979 visitors from the United States, the country’s second-biggest market, the DOT added.

Tiger Airways Philippines, which was still using the corporate name Southeast Asian Airlines Inc. at the time of the filing, was acquired by Cebu Pacific in February as part of a “wide-ranging” alliance with Singapore’s Tiger Airways, a former shareholder.

That deal increased the domestic market share of Cebu Pacific to 56 percent when the transaction closed in February. This is apart from giving Cebu Pacific access to Tigerair Philippines’ valuable slots at the congested Ninoy Aquino International Airport in Manila, the country’s busiest air gateway.

Together with Tiger Airways Philippines, Cebu Pacific was projected to serve about 17 million passengers this year, up 18 percent from 2013, Cebu Pacific CEO Lance Gokongwei said in April.