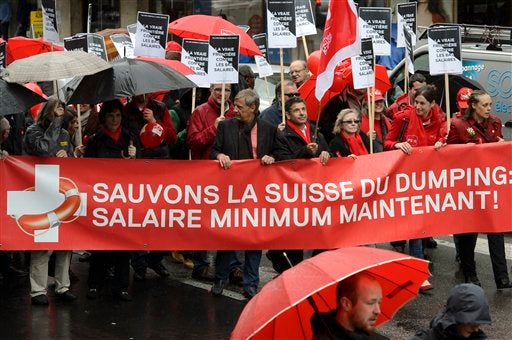 In this picture taken May 1, 2014, demonstrators demand on a banner reading “Let’s save Switzerland from dumping: wage minimum now!” in Geneva, Switzerland. AP FILE PHOTO

GENEVA—Swiss voters are to decide in a referendum on Sunday whether to bring in the world’s highest minimum wage, offering each and every worker at least $25 an hour.

Supporters say the move is justified by sky-high living costs in the Alpine nation, but surveys suggest Switzerland will say “No thanks” to a minimum wage so high it could pass for a mid-management salary elsewhere.

The Swiss will also be voting on a multi-billion-dollar deal to buy fighter jets from Sweden, and are almost certain to back measures to ban pedophiles from working with children.

Most voting stations open at 10:00 am (0800 GMT) and are set to close at noon, with an early estimate of the results expected soon afterwards.

Few Swiss however turn out to cast their ballots in person, with most choosing to vote by post or Internet in the referenda held every three months as part of the country’s direct democracy system.

Much of the national debate ahead of Sunday’s vote has focused on the pros and cons of introducing a minimum wage.

If the voters agree, the small nation nestled in the heart of Europe, would go from having no minimum wage to boasting the world’s highest, far above the $7.25 in the United States, 9.43 euros in France, 5.05 euros in Spain and the recently agreed 8.00 euros in Germany, set to take effect next year.

But the initiative, which has drawn envious and incredulous attention from abroad, is not expected to pass, with recent surveys hinting two thirds of Swiss voters oppose it.

Opponents have warned a minimum wage, and especially such a high one, would deal a death blow to many businesses and would weaken Switzerland’s healthy economy.

Supporters counter that higher basic wages would boost the purchasing power of some 330,000 people, or one in 10 employees in the country.

People working in sales, services and farming, or as hairdressers and flight attendants, for instance, generally earn far less than the proposed minimum wage.

Fighter jet deal up in air

Polls have also long indicated Sunday’s vote would spell the end for a 3.1-billion-Swiss-franc (2.5 billion-euro, $3.5-billion) deal a decade in the making to buy 22 Gripen fighter jets from Sweden.

But the gulf between the two sides has recently narrowed, leaving the vote on whether to fund the purchase on a knife-edge.

Critics argue Switzerland does not need new fighter jets and warn they could end up costing far more than the country has bargained for.

The government and other supporters meanwhile been campaigning hard to stress the importance of the new planes for Swiss security, and observers say the scale could still tip in their favour.

Among other issues on the table Sunday is an initiative that, if adopted, would automatically ban all convicted paedophiles from working with children for life.

Read Next
Father Franco is now Padre Ninno
EDITORS' PICK
Cherry Mobile teams up with Cloud Panda PH, launches online store
DOH: COVID-19 mortality doubling time, transmission rate down
Someone from the Philippines can become $356 Million richer this Tuesday
Leveling up your ‘lutong bahay’ with the kitchen companion you never knew you needed
Congress urged to extend session for approval of COVID-19 response bills
Amid protests, Trump talks of war — and reelection
MOST READ
Binay dares DOTr execs to commute to work during GCQ
51 percent of German firms holding back investments in PH, but not because of COVID-19
Cole Sprouse arrested while joining peaceful protest against racism
Chaos as thousands return to work in Metro Manila
Don't miss out on the latest news and information.