Toward building a shopping and dining community 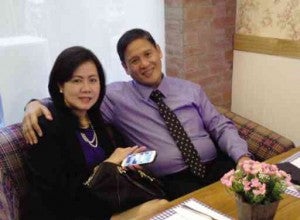 With the Filipinos’ penchant for shopping and eating in mind, the business savvy Edgardo and Lumen Limjoco are building a virtual community of consumers and merchants.

The husband and wife, both licensed architects who have focused on operating a family business since the Asian crisis that dragged the real estate sector, recently created the “Zing Rewards” brand under their company, Jabez Infinity Group Inc.

The company offers a service that makes shopping and dining even more interesting for consumers and, consequently, boosts sales of merchants.

“With the kind of service that we offer, both merchants and consumers benefit,” Edgardo tells the SundayBiz .

“And with the intention of inviting more and more merchants and consumers to be part of the Zing Rewards program, we are in effect building a shopping and dining community,” he adds.

The business model observed by the company is quite simple.

Under the model, Zing Rewards invites merchants from a wide range of sectors to become part of the “community.” Once a merchant becomes a member, it enjoys the promotion services offered by the Rewards.

In particular, Zing Rewards promotes the brands of all member-merchants through various channels, including print and social media. The promotion is intended to gather, on behalf of the merchants, more customers and instill loyalty among existing ones.

In return, the merchants are expected to grant rebates to customers who are also members of the “community.” For identification purposes, these customers are given membership cards.

A consumer who wants to become a member of the community in order to avail herself of points and, consequently, rebates.—which range from 5 to as high as 30 percent, depending on the generosity of the merchant.—has to purchase the membership card.

To ensure seamless operation of the community, Zing Rewards takes care not only of the promotion but also of the cost of the required information technology.

Edgardo explains that an IT facility is needed to track and store information, which includes not only the points earned by card holders from their purchases but also customer feedback and demographics that are useful for the merchants.

Zing Rewards earns from the sale of membership cards to consumers and from a fee imposed on the merchants. The fee comes not in the form of upfront payment but in the form of a certain percentage of rebates granted to shoppers.

“We are creating a community where members mutually benefit one another,” Edgardo says.

His wife, Lumen, says the “merchant launch” of the Zing Rewards program was held last March.

Since the launch, there are now over 130 merchants who have become part of the Zing Rewards community. Among them are Sumo Sam Legacy, Rue Bourbon, The Theodore Hotel, the Wine Club, Empire Boxing, and Sip & Gogh.

Lumen says the “consumer launch” will be held in June.

Zing Rewards targets to have at least 500 member-merchants and at least 100,000 card holders within one year from launch.

Edgardo says selling the service to merchants was not difficult. After all, merchants wanting to become a member and eager to avail themselves of the promotion service by Zing Rewards do not have to make an upfront cash payment.

They only give Zing Rewards a percentage of the rebates given out to consumers who have made a purchase.

“I don’t see any reason why a merchant will not take our offer. If the business proposition works, then that is good for the merchant. If it does not work, it will not hurt the merchant in any way because there is no cash-out,” Edgardo says.

By becoming members of the shopping community being built by Zing Rewards, he says, merchants are able to ride on the promotion and the resulting expansion of their customer base.

Edgardo says the P500 membership fee is quite a small price to pay for the significant rebates a shopper can get from being a member of the Zing Rewards community.

Besides the rebates, the comfort of having just one card for a long list of merchants is an added benefit for consumers.

“If your are a shopper and a regular customer of 30 merchants, would you want having 30 privilege cards in your wallet? I guess not. With Zing, a shopper only has to carry one card to avail herself of rebates from a long list of merchants,” Edgardo explains.

Moreover, cardholders who invite friends to shop or dine in member-merchants and to become cardholders themselves also gain points from doing so.

Edgardo says Zing Rewards has an advocacy of helping boost the sector of small and medium enterprises (SMEs) as a means for the country to achieve inclusive economic growth.

He says Zing Rewards is inviting even SMEs to become part of its online shopping community.

“We will not just focus on big names; we want to have more SMEs,” he says.

Through the promotion of their products and services, he says, Zing Rewards hopes to somehow contribute to the building of their customer base and to their progress.

The Philippines recently became one of the fastest growing Asian economies, growing by 6.8 percent in 2012 and 7.2 percent last year. Despite this, the country continues to suffer from one of the highest poverty rates in the region, with about a fourth of its population living below the poverty line.

Agreeing with the common view of economists, Edgardo says the country needs to develop the SME sector if it wants an economic growth that is driven and enjoyed not only by the rich but by a much bigger proportion of society.

After all, SMEs account for about 99 percent of all registered businesses in the country and employs about 60 percent of workers the country.

Edgardo says he believes in the value of entrepreneurship and sees prudence in helping more Filipinos appreciate the benefits of putting up their own businesses.

In the case of the Limjoco family, the couple encourage their three children to pursue the path of entrepreneurship. Lumen shares that their 25-year-old daughter, their eldest, helps in the family business.

“Entrepreneurship is something they seem to like to pursue as well, and we are glad about that,” Edgardo says.

The owner of Zing Rewards, itself an SME with about 20 employees, says the company wants to contribute to the goal of achieving inclusive economic growth through the way it knows best—further promoting shopping and eating.