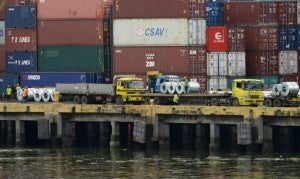 MANILA, Philippines—For the fourth consecutive month this year, the Bureau of Customs failed to meet its revenue goal, with April collections coming up to a little over P30.5 billion, about P5.26 billion short of its P35.79-billion target for the 19-day trading period, according to a BOC report.

Last month’s revenues brought to P117 billion the BOC’s collections from January to April, about P13.54 billion short of its P130.57-billion goal for the period, said the bureau’s “preliminary” revenue collection report, a copy of which was furnished the Inquirer by a top Customs official

Faced with the growing revenue deficit, some BOC oldtimers say it was unlikely the agency would meet its annual collection target of P408.1 billion.

Still, the April revenues were P3.31 billion more than the bureau’s collection during the same period in 2013, which totaled P27.22 billion.

“The first quarter of the year is traditionally a lean season for imports. The period comes immediately after the high demand of the Christmas season and the trading slowdown during the Chinese New Year,” said another customs official.

But he said that “during the succeeding months, the bureau bounces back with higher revenue collections”.