S&P’s BBB classification highest ever given to country
By: Paolo G. Montecillo - @inquirerdotnet
Philippine Daily Inquirer / 12:38 AM May 09, 2014 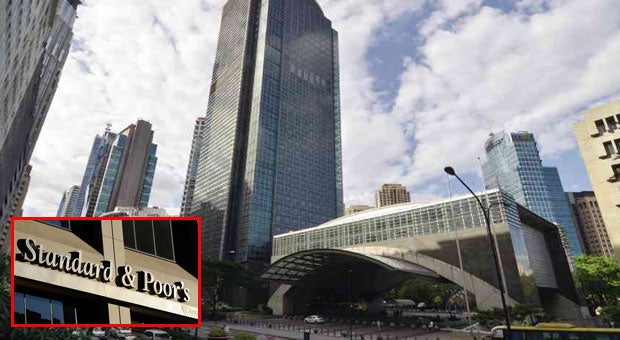 The Philippines has obtained its highest credit rating in history (BBB classification from S&P) in recognition of the reforms undertaken by the Aquino administration which have allowed the country to outperform its Southeast Asian neighbors in terms of economic growth.

MANILA, Philippines—The Philippines has obtained its highest credit rating in history in recognition of the reforms undertaken by the Aquino administration which have allowed the country to outperform its Southeast Asian neighbors in terms of economic growth.

From the previous rating of “BBB-,” S&P now rates the Philippines at “BBB,” one notch above minimum investment grade.

This is the best grade the Philippines has ever received from any of the three major credit rating agencies.

“We will continue to institutionalize good governance so our country’s economic growth is both sustainable and inclusive,” he said.

The S&P said it expected recent reforms that had paved the way for the country’s economic boom to be sustained beyond President Aquino’s term.

“We expect ongoing reforms on a broad range of structural, administrative, institutional and governance issues to endure beyond the term of the current administration,” it said in a statement.

A sovereign rating is the credit rating of a government and serves as an indicator for the perceived health of a national economy as well as its attractiveness to foreign investors. This is in addition to the more immediate effect of lowering the interest costs of the government and local corporations whenever they borrow funds from overseas.

S&P is one of the so-called “Big Three” credit rating agencies that make these evaluations. The other two are Moody’s Investor Service and Fitch Ratings.

Last year, the economy expanded by 7.2 percent, faster than the previous year’s 6.8 percent and better than the government’s goal of 6-7 percent for the year.

The country’s growth was also the fastest among all major Southeast Asian economies.

This, despite the damage caused by Super Typhoon Yolanda last November in large parts of the Visayas, which most observers expected would lead to a sharp slowdown in growth.

The government has a more ambitious growth target of 6.5 to 7.5 percent. By 2016, it aims to drive economic growth to as much as 8.5 percent.

“The Philippines proved that it is able to sustain high economic growth despite external volatility and in the case of last year, successive domestic natural disasters,” Bangko Sentral ng Pilipinas Governor Amando M. Tetangco Jr. said in a statement.

“This rating upgrade is also a recognition that the structural reforms that we have put in place continue to gain traction, as demonstrated by the significant improvements in the country’s position in international governance and competitiveness surveys,” he said.

S&P said it was optimistic that the gains in revenue generation, spending efficiency and improvements in public debt profile and the investment environment would be sustained under the next administration, regardless of who succeeds Aquino.

Before Thursday’s upgrade, the government’s economic managers had already expressed optimism about another upgrade from credit rating agencies, since investors both here and abroad had already been pricing Philippine debt instruments at rates that are equivalent to those of higher-rated nations.

Reforms implemented since 2010 have focused mainly on improving transparency and accountability in government, in line with the goal of promoting economic growth and poverty reduction.

Among these reforms are the Bureau of Internal Revenue’s efforts to plug the loopholes in the country’s tax regime, as well as the agency’s crackdown on tax evaders.

Last year, the budget deficit stood at the equivalent of 1.4 percent of gross domestic product (GDP). The government wants to contain the budget shortfall below the “sustainable” level of 2 percent of GDP, even as it ramps up spending for infrastructure projects and social safety nets.

S&P also cited the country’s strong external liquidity and international investment position coupled with an effective monetary policy framework that has sustained low inflation and interest rate as supportive to the rating upgrade.

Fitch Ratings and Moody’s Investor Service both have the Philippines at minimum investment grade, one notch lower than S&P’s new score.

Fitch’s announcement of this grade rating for the Philippines earlier this year disappointed the country’s economic managers who all felt the Philippines deserved a higher score.

Moody’s has a “positive” outlook for the Philippines, which implies a possible upgrade in the next 12 to 18 months.