Few in the private sector and government realize the seriousness of the rice problem. We should take immediate action to address this.

Rice smuggling has stopped, thanks largely to the combined efforts of the government (led by Customs Commissioner John Phillip Sevilla and Deputy Commissioner Jessie Delloza) and the private sector (led by the National Rice Farmers Council and Rice Watch).

The government had announced that the Philippines would be self-sufficient in rice by 2013. This did not happen. Economists now say we need at least 1.2 million tons of imported rice this year.

Alyansa Agrikultura’s Omi Royandoyan had cautioned DA officials against misleading President Noynoy Aquino and Agriculture Secretary Proceso Alcala into believing that rice self-sufficiency could be attained in 2013. But this fell on deaf ears. The Alyansa now hopes that its call for immediate action does not suffer the same fate.

In the table, if we add P2 wholesale margin to the Vietnam price, we can compare the resulting P21.50 imported wholesale price to our domestic wholesale price of P38.99. Our domestic rice will then be 81 percent higher than imported rice. If we get the proposed Asean 35 percent rice tariff rate in 2017, we must therefore improve on productivity by 46 percent in three years.

Both the government and the private sector must jointly work for this improvement. A cost-effective way is to promote technologies such as the System of Rice Intensification (SRI).

In 2012, Cambodia’s Yang Saing Noma received the Ramon Magsaysay Award for promoting SRI among approximately 450,000 rice farmers. This was cited as the main reason his country achieved rice self-sufficiency. By contrast, less than 500 Filipino farmers are using this technology. This is most unfortunate because SRI has been producing similarly good results in the Philippines.

Former Department of Agrarian Reform director Edilberto Banigued reports the result of 90 participants in 3 barangays of Molave, Zamboanga del Sur, “The yield increases ranged from 20 percent to 75 percent. Furthermore, there was a significant decrease in the cost of seed, water, fertilizer, and pesticides, for an overall 20-30 percent decrease in costs.”

From Santiago City, Isabela, Fr. Clarence Olat reports: “We had 11 large-scale SRI trials with an average of 7,041 sq.m. We got 15-20 percent yield increases and overall cost savings of 10-15 percent.”

According to SRI Philippines Coordinator Obet Verzola, SRI received government support of P800,000 in 2007. Except for the printing of 3,000 copies of an SRI primer and the occasional free use of DA conference rooms, there has been no government support since then. On a shoestring budget with OXFAM support, Verzola now has 10 part-time trainer-volunteers who help him promote SRI.

Two months ago, when the Kapampangan Development Foundation (KDF) under chair Manuel Pangilinan and president Benigno Ricafort found out about this, it embarked on an SRI project in Pampanga. Palay planted using this technology survived a one-month drought, giving credence to the claim that the organic-oriented SRI is ideally suited for climate change. For more information on this and SRI, please contact Verzola at 09178117747 or e-mail him at [email protected] He will send free SRI materials and even provide free one-day training for a minimum group of 20 persons.

It is private sector initiatives like this that are needed to supplement existing government efforts in addressing the rice problem. What is more necessary is for the government and private sector to jointly formulate and implement a comprehensive rice plan that will significantly increase our rice productivity, increase farmer incomes, and lower the consumers’ purchasing rice price.

The government has talked about having a 7/7 objective: a yield of 7 tons per hectare with a P7 per kilo cost. However, no specific plan has been formulated to achieve this. Royandoyan says we might be left again with much rhetoric and little reality, in the same way that we were promised rice self-sufficiency in 2013.

2017 is only three years away. We must immediately address our needed 46 percent increase in rice productivity. But unless we admit that we have a very serious rice problem, we may again take no action, and consequently face an economic and social disaster in 2017.

(The author is chair of Agriwatch, former Secretary for Presidential Flagship Programs and Projects, and former Undersecretary for Agriculture, Trade and Industry. For inquiries and suggestions, email [email protected] or telefax (02) 8522112). 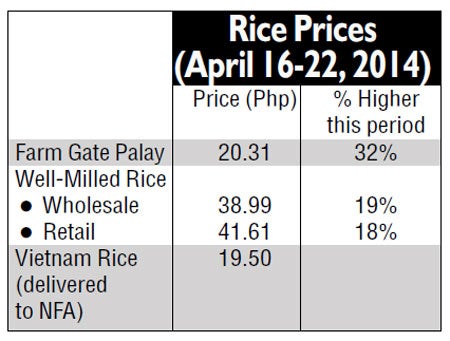