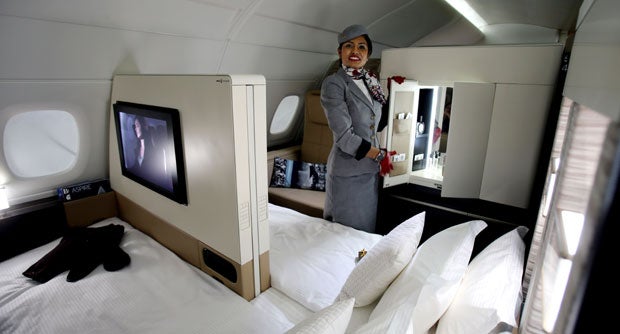 It is the latest salvo in the worldwide battle among airlines for well-heeled customers. Their willingness to spend big on premium seats can make a big difference to an airline’s bottom line.

The Abu Dhabi-based carrier revealed the front-of-plane amenities as part of a broader rollout of plush new cabin offerings for dozens of long-range jetliners it plans to receive over the coming years.

Etihad Chief Executive James Hogan conceded that offering what the airline says is the first-of-its-kind multi-room suite helps generate buzz, but that ultimately it is a serious effort to bring in more cash. The carrier already woos the flying elite with perks including first-class onboard chefs and in-flight nannies.

“Obviously there’s going to be a halo effect in the positioning of Etihad Air as a premium carrier,” he said. “But we wouldn’t do it unless we felt we could make money with it. … This is a top-end market. There is demand here.”

Its base in the Emirati capital, Abu Dhabi, this year became the first in the Mideast to open a U.S. preclearance facility staffed by American customs and border officials. U.S. pilots and members of Congress have criticized the facility, which is largely funded by the UAE, alleging it puts American carriers at a disadvantage.

Since starting operations in 2003, Etihad has built a fleet of 96 planes. It carried 11.5 million passengers and posted a profit of $62 million last year.

It has ordered more than 220 additional planes, including 10 Airbus A380s and 71 Boeing 787s being outfitted with new interiors introduced Sunday.

Among the promised amenities for those aircraft are 11-inch seatback TV screens in economy, a “lobby” on the A380s featuring a semi-circular leather couch and bar area for first and business class passengers, and prayer areas for Muslim passengers that can be curtained off and have an electronic indicator pointing the way to Mecca.

Etihad has been aggressively building stakes in foreign carriers, including Virgin Australia and Germany’s second largest airline Air Berlin. It has for months been considering buying a piece of struggling Italian carrier Alitalia. Hogan had no comment on those negotiations Sunday.

Its bigger rival Emirates, based in nearby Dubai, has offered onboard showers to first-class passengers aboard its double-decker Airbus A380s since the plane joined the fleet in 2008. It also separates coach passengers from those in business and first class on an entirely different floor in its dedicated concourse in Dubai.

One passenger — or a couple — aboard each of its new A380s will be able to book a three-section miniature suite that the airline is calling a “residence” at the very front of the plane’s upper deck.

The 125-square-foot (11.61-square-meter) area includes a “living room” partitioned off from the first-class aisle that includes leather seating, chilled minibar and a 32-inch flat-screen TV. There is a separate bedroom with space for two that can be closed off from the rest of the cabin and a private bathroom with shower.

A white-gloved personal butler trained in London will be on hand to wait on passengers in the suite, giving them what the airline promises will be “discrete personal service and attention to detail found in the world’s most exclusive hotels.”

Etihad expects to get its first of its A380s in December, which it will deploy on the Abu Dhabi to London route.

Baumgartner said it will likely cost three to four times as much as regular first-class seats, or about $21,000 from Abu Dhabi to London. One way.