Investment pledges approved by PEZA up by 25% to P72.4B from January to April | Inquirer Business
Close
menu
search

Investment pledges approved by PEZA up by 25% to P72.4B from January to April 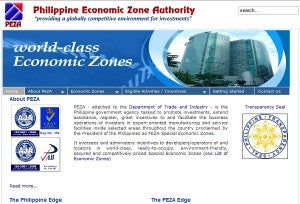 MANILA, Philippines—Investment pledges approved by the Philippine Economic Zone Authority (PEZA) grew by 25 percent to P72.4 billion in the first four months of the year, due largely to the increasing number of foreign manufacturing companies that are setting up shop in the country.

Elmer H. San Pascual, group manager of the promotions and public relations group at PEZA, said in a text message that these investments were both for the new and expansion projects in the manufacturing as well as the electronics and semiconductor industries.

More specifically, San Pascual said these investment commitments came from the new investments to be made by a German electronics company and a Japanese motor vehicle and spare parts manufacturer.

Investments in ecozone, IT parks and building development were also “significant” for the period January to April 2014, San Pascual added.

Meanwhile, the value of exports coming from the PEZA-managed ecozones rose by 7 percent to $6.75 billion in the first two months of the year, from the $6.306 billion posted in the same period in 2013.

Foreign and local companies continue to be bullish about prospective investment opportunities in the Philippines, due largely to the country’s stellar economic performance, investment grade ratings, strong domestic consumption, good governance, improved business environment, as well as the various other reforms being implemented by the Aquino administration.

PEZA continues also to woo investors through various roadshows in and outside the region. These roadshows, wherein they pitch the various investment opportunities in the Philippines, are expected to help PEZA achieve a 10-percent increase in the approved investment pledges.