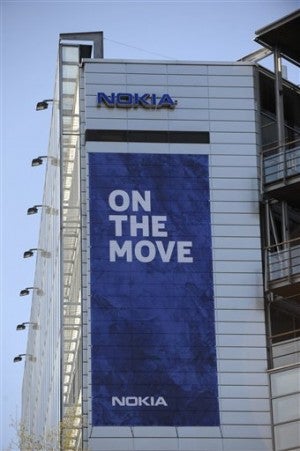 HELSINKI — Nokia says it has completed the 5.44 billion-euro ($7.5 billion) sale of its troubled cellphone and services division to Microsoft, ending a chapter in the former world leading cellphone maker’s history that began with paper making in 1865.

The Friday closure of the deal, which includes a license to a portfolio of Nokia patents to Microsoft Corp., follows delays in global regulatory approvals and ends the production of mobile phones by the Finnish company, which had led the field for more than a decade, peaking with a 40-percent global market share in 2008.

Nokia said the total transaction price would be “slightly higher” than when it was originally announced on Sept. 3 because of adjustments made for net working capital and cash earnings. The deal was to have closed during the first quarter but was held up because of delays in approvals, including from China.

The former mobile leader, which had also provided a significant boost to the Finnish economy, gradually lost its grip on the market as it failed to meet the smartphone challenge of Apple’s iPhone, Google Inc.’s Android operating system and cheaper competitors in Asia.

In an attempt to reverse the slide, it teamed up with Microsoft in 2011, replacing its old operating system with one based on Windows, but it took them eight months to produce the first Nokia Windows Phone, and consumers didn’t warm to the handset or subsequent models.

Nokia will now focus on networks, mapping services and technology development and licenses, saying it will give more details of the deal and future plans when it releases first-quarter earnings on April 29 — the last report to include the ailing devices and services division. It is also expected to name the new Nokia CEO.

“The new Nokia can now go forward and concentrate on its remaining assets,” said Neil Mawston from Strategy Analytics, near London. “It has one of the best IPR (intellectual property rights) assets in the entire industry and it has good mapping services.”

Nokia said two plants will remain outside the deal — a manufacturing unit in Chennai, India, subject to an asset freeze by Indian tax authorities, and the Masan plant in South Korea, which it plans to shut down. The adjustments have no impact on the deal and Nokia “will be materially compensated for any retained liabilities,” the company said.

Microsoft said it will acquire some 25,000 Nokia employees in 50 countries, including 4,700 in Finland, leaving the Finnish company with 6,000 workers in the Nordic country.

The Nokia headquarters in Espoo, near the Finnish capital, Helsinki, were draped Friday in a banner with the words “On the Move.” They will be taken over by Microsoft and Nokia’s remaining workers in the area will move to nearby offices.

Microsoft said that former Nokia CEO Stephen Elop will serve as executive vice president of the Microsoft Devices Unit, which will include Nokia’s former Lumia smartphones and tablets. Microsoft Mobile Oy, a subsidiary of Microsoft, will develop, manufacture and distribute Lumia, Asha and Nokia X mobile phones and other devices, it said.

Nokia to be named Microsoft Mobile