Pacquiao may be 2013 top taxpayer 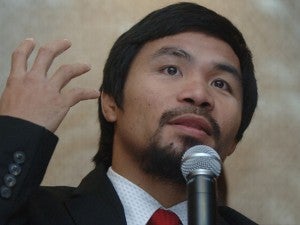 GENERAL SANTOS CITY, Philippines—Amid his alleged tax woes, boxing icon and Sarangani Rep. Manny Pacquiao may turn out to be the country’s top individual taxpayer for 2013, one of his lawyers said Friday.

This could make him the country’s top individual taxpayer, Rojas said, citing figures from the income tax return filed this month by the boxer-lawmaker at the office of the Bureau of Internal Revenue (BIR) here.

“Everything was declared in his 2013 income tax return—his earnings from boxing, endorsements and his businesses,” Rojas told reporters.

He said his prediction about Pacquiao becoming the top individual taxpayer for 2013 was based on the 2012 BIR list.

According to that list of the top 500 taxpayers, Vivian Que-Azcona, owner of Mercury Drug, was the country’s top individual taxpayer with a total tax payment of 131.4 million.

Pacquiao was 36th on the list with P22.3 million, which was bigger than the combined tax payments made by tycoon Henry Sy (P16.4 million – 74th) and tobacco magnate Lucio Tan (P12 million – 138th place).

But the BIR wants Pacquiao to pay more.

Revenue Commissioner Kim Henares said Pacquiao still owed the government P2.26-billion for his income derived from his 2008 and 2009 fights abroad.

The BIR has issued warrants of distraint, levy and garnishment against the properties and bank accounts of the Filipino ring icon to ensure collection.

But just this week, the Court of Tax Appeals (CTA) ordered the BIR to lift these warrants. However, the court also ordered Pacquiao to post P3.2-billion in cash bond or a P4.9 billion surety bond while the decision on his appeal questioning the BIR’s tax assessment was pending.

Rojas said they were now helping Pacquiao prepare a motion asking the CTA to reduce the cash bond.

“His net worth is just about P1.7 billion. From being the richest, he would be the poorest congressman after posting the bond,” Rojas said.

He said talks between the Pacquiao camp and the BIR were also continuing.

He said the pugilist was hoping to arrive at an “acceptable compromise deal.”

“The taxes deducted by the US Internal Revenue Service are much bigger so once he is given the appropriate tax credits, I think, there would even be excess in his tax payments,” Rojas said.