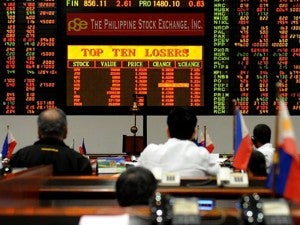 MANILA, Philippines—Local stocks dipped on Monday as global jitters over another US economic recession were rekindled by a bleak US jobs report.

The main-share Philippine Stock Exchange index shed 10.35 points or 0.24 percent to 4,382.56 but the day’s losses were tempered by the recovery of the mining/oil counter which was heavily battered last week.

The mining/oil sub-index surged by 2.62 percent alongside the rebound of Lepanto “A” (open only to local investors) and “B” (open to both local and foreign investors), Philex Mining and Manila Mining “A”.  United Paragon Mining also gained in heavy trade, aiding the sub-index.

The PSEi itself, on the other hand, was weighed down by PLDT, SM Investments, Banco de Oro, Ayala Corp., EDC, AGI, Metrobank, DMCI, Ayala Land, RLC and Security Bank. Some investors were tempted to pocket gains from blue chips which were the market’s favorites last week.

Apart from mining stocks, other companies that defied the day’s downturn while landing in the list of actively traded stocks were Boulevard Holdings, Minerales Industrias and Megaworld.

The PSEi’s drop was much more modest compared to the 253.31-point or 2.2 percent slide by the Dow Jones Industrial Index on Friday on reports that no new jobs were created in the US last month.

Wall Street will be closed Sept. 5 in observance of Labor Day in the US.

Value turnover was anemic at P3.54 billion, which was way below the daily average seen in the last few months. (Last Friday, the value turnout amounted to P4.48 billion.) There were 66 advancers which were edged out by 89 decliners while 34 stocks were unchanged.

Fund manager Gus Cosio of First Metro Asset Management said on Monday the big drop in Lepanto prices last week should not discourage investors but instead encourage them to step back a while and examine their risk appetite.

“What I like about the mining sector is that it looks to be a sunrise industry again for the country. Yes, it was the industry of the 1960’s and 1970’s, but it was dormant for over 20 years. It is only now that we are seeing a revival and revivals, such as this, normally take years to settle down. We should be in there for the ride and be thankful that we are here to profit from it,” Cosio said in his blog.

Cosio said the recent correction in Lepanto and ORE would provide room to “re-establish” positions.

As for other mining stocks, Cosio said he was quite confident about Manila Mining B on expected plans for its Kalayaan mine to go into production within the next 12 months.

“The price of AT (Atlas) is meandering at these levels, but profitable productions can be expected this year at current metals prices.  I am hearing some institutional accumulation of AT,” he said.

With Philex, Cosio said he’s a bit skeptical about a further rise in the price of the stock although he noted that some analysts were still looking at above P30 price for this stock. “Philex is still the bluest among the mining stocks, and it should not be ignored if only for its value as a bell weather of gold prices,” he said.

Read Next
Crude falls in Asia
EDITORS' PICK
Rare earth metals at the heart of China’s rivalry with US, Europe
Kai Sotto continues to inspire Filipinos by sharing his passions and stories with Smart Prepaid
G7 rivals China with grand infrastructure plan
PNP, PDEA destroy P25.8M worth of marijuana in Kalinga
Ahead of ONE: Full Blast II, Mongkolpetch warns Elias Mahmoudi: ‘Watch out for my fists’
Alex Eala wins Grand Slam on Independence Day: ‘I hope I made my contribution to the country’
MOST READ
Chel Diokno, Bro. Eddie, Ate Vi decline 1Sambayan 2022 poll nomination
1Sambayan names 6 choices to pit vs Duterte’s anointed in 2022
Groups slam Duterte ‘surrender’ to China
G7 rivals China with grand infrastructure plan
Don't miss out on the latest news and information.