Fair trade, competition law sought by PCCI in road to ASEAN integration by 2015 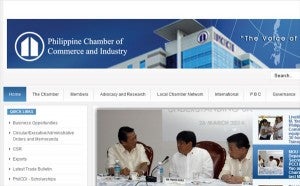 MANILA, Philippines—The Philippine Chamber of Commerce and Industry, the country’s largest business organization, has warned anew that the country would be left at a disadvantage if Congress fails to enact a competition law that would prevent unfair trade practices.

“The economy needs a competition law to upgrade the country’s competitiveness and maximize the benefits of integrating the economy with those of other ASEAN economies by 2015.  If we give our neighbors a difficult time to do business here, they will also give us a hard time accessing the ASEAN market of 600 million consumers,” said PCCI president Alfredo M. Yao.

In a statement, Yao expressed hope that the 16th Congress would give top priority to approving the pending competition bills as “time is running out.”

It is also seen to level the playing field for new entrants and current investors wishing to expand or diversify their investments in the domestic market.

“A competition law would be a landmark legislation whose significance to the economy would be underscored once the Asean Economic Community (AEC) and other economic partnership agreements come into play,” he added.

The AEC, which will be established by 2015, will transform the 10 member states of the Asean into a single market and production base. This presents dynamic competition and vast opportunities with the free flow of goods, services, skilled labor, investments and capital.

The PCCI has quoted former economic planning secretary Cielito Habito as saying that certain restrictive business practices have given rise to the need for a competition law.

In a seminar-workshop on competition policy and law organized for legislative staff by the PCCI, the USAID-TRADE (Trade Related Assistance for Development), the House committee on trade and industry and the Senate committee on trade, commerce and entrepreneurship, Habito reportedly cited how small retailers have been threatened at being cut off from supply deliveries by giant manufacturers if the stores continued to sell soap produced by livelihood producers.

PCCI said that certain malls would limit the sites for competing ATM brands in their premises, while micro, small and medium enterprises have been discouraged by big banks from borrowing.  Farmers are penalized by high shipping costs because of the lack of competition in the shipping industry, according to the PCCI.