BOP swings to deficit of $4.47B in Q1 | Inquirer Business
Close
menu
search 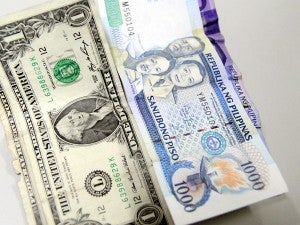 The outflow of foreign currencies surpassed the inflow in the first quarter as portfolio investors dumped peso-denominated assets, along with other emerging-market assets, on reports that the US Federal Reserve would further taper its stimulus program.

The Bangko Sentral ng Pilipinas reported Monday that in the first three months of the year, the outflow of foreign exchange from the country exceeded the inflow by $4.47 billion.

The balance of payments (BOP) deficit in the first quarter was a reversal of the $1.54-billion surplus registered in the same period last year, documents from the central bank showed.

In March alone, the country registered a deficit in its BOP to the tune of $336 million, swinging from a surplus of $452 million in the same month last year. This arose after the national government settled some of its foreign currency-denominated debts and as the BSP sold dollars to help keep the peso’s depreciation manageable.

Meantime, the BOP’s shift from a surplus to a deficit in the first quarter happened as capital-market players around the globe speculated on how long it would take the US Fed to complete the withdrawal of its stimulus program, which originally amounted to bond purchases worth $85 billion a month. It now stands at $55 billion.

Since a portion of the proceeds from the US Fed’s stimulus program spills over to emerging markets in the form of portfolio investments, the tapering has raised concerns that demand for emerging-market assets would shrink and affected currencies would depreciate.