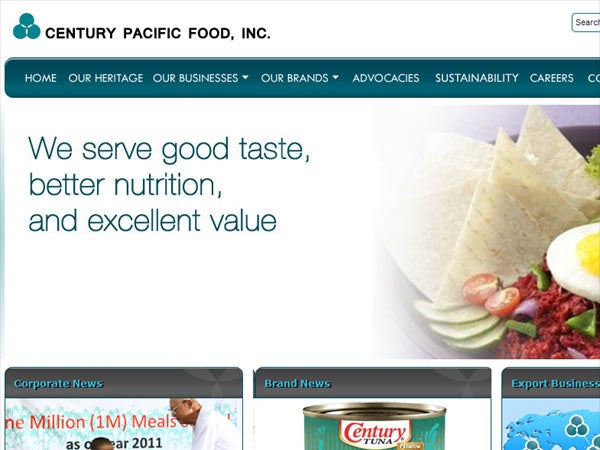 MANILA, Philippines—Leading food manufacturer Century Pacific Food Inc. has finalized its initial public offering at a price of P13.75 per share, allowing the company to raise P3.16 billion in fresh funds for expansion.

The IPO price was set near the upper end of the indicative range of P12.50 to P14.50 for this initial public offering.

“Yes, final already (at) P13.75,” Eduardo Francisco, president of BDO Capital, said in a text message on Monday. BDO Capital is one of the underwriters for this offering along with BPI Capital and First Metro Investment Corp.

About 229.65 million common shares will be sold by the company to the public through the Philippine Stock Exchange. The offering will run from April 23 to 29 while listing on the PSE will take place on May 6.

Market sources estimated the pricing at around 20 times the company’s projected earnings for 2014, a discount to the valuation of comparable peers like Universal Robina Corp.

Apart from flagship Century Tuna, the company produces canned food under the brands 555 for sardines and tuna, Argentina and Swift for canned meats and Angel and Birch Tree for canned and powdered milk.

The stock debut will bring to public hands about 10 percent of the company’s common shares. The offering targets mostly domestic investors.

Proceeds from the offering will be used by the company to fund its planned capital expenditures for expansion and profit improvement, potential opportunistic acquisitions, retirement of debt, and working capital for the succeeding years.

Founded by businessman Richard Po Sr. 35 years ago, Century Pacific is a leading branded food company primarily engaged in the development, processing, marketing and distribution of processed fish and meat in the Philippines. It is also a big player in the local processed dairy products industry. It was the largest producer of canned foods in the Philippines in terms of retail value, based on Euromonitor data for February 2013.

Century Pacific all set for IPO