MANILA, Philippines – Ford Philippines rounded up the first quarter of the year with record breaking performance for the month of March, with retail sales soaring 34 percent year-over-year to1,339 units.  Sales in March helped the first quarter increase 38 percent from the same quarter last year to 3,692 units.

“We continued to build on our momentumsince the start of the year, allowing us to make further progress on our One Ford plan in the Philippines,” said Kay Hart, managing director, Ford Philippines. “With our expanding line-up of global Ford vehicles in our showrooms, we are reaching out to more customers, which in turn is helping to widen our brand appeal in the market.” 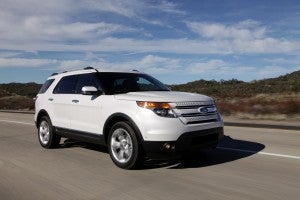 Leading the way was the all-new Ranger, whichhas been Ford’s best-selling nameplate in the Philippines for fourteen consecutive months.  March sales of the Rangerjumped 91 percent year-over-year to 564 units.

“The strong demand for the all-new Ranger continues to rise, which proves how much our customers admire the award-winning pick-up truck’s class-defining features and remarkable performance.  We’re fully committed to respond to this demand by fulfilling all customer deliveries as quickly as possible,” said Hart.

Ford’s popular SUVs also contributed to record-breaking sales in March.  The Ford Explorer delivered sales that soaredmore than six-fold from the same time last year to 119 units, while the popular Ford Everest family SUV recorded deliveries of 319 units in March, up 14% from a year ago.

The segment-leading new Ford Fiesta had retail sales increase 45 percent to 247 units in March, driven by healthy demand for its 1.0L EcoBoost variant.  Ford’s revolutionary EcoBoost engine technology helps the downsized 1.0L engine deliver the power and performance of a traditional 1.6L engine with fuel economy gains of up to 20 percent.

Following the launch of the all-new Ford EcoSport in the country on January 30, Ford Philippines started fulfilling customer deliveries on April 3.

“We share in the excitement of our customers with the deliveries of the all-new EcoSport.  This fun-to-drive urban SUV will be the perfect companion of Filipinos as they go around the city and nearby provinces this summer break,” said Hart.

Ford also reaffirmed its plans to further expand its nationwide dealer network to 37 locations this year to help support the company’s continued growth and provide a world-class customer and ownership experience.

ADVERTISEMENT
Read Next
Russian economy hit by Ukraine turmoil
EDITORS' PICK
Quick chat with Nicole Andersson: ‘You really don’t need much to be happy’
Nograles: Cabinet members to donate 75% of monthly salary to aid COVID-19 fight
Robredo spox thanks Duterte for defending VP’s efforts vs COVID-19
IATF to LGUs: Issue ordinances vs attacks on frontliners, COVID-19 patients
10 Filipinos positive for COVID-19 in UK, 7 in Ireland — envoy
Diokno to Duterte: OK to make fun of buck tooth, but focus on people’s needs first
MOST READ
Coronavirus hotbed Rizal to shut borders on April 6
ADB warns PH against prolonged lockdown
Gov’t mulling quarantine period extension of 15-20 more days
Sotto on Isko Moreno’s call: We do our job without the media following our every move
Don't miss out on the latest news and information.

Cebu records no new COVID-19 case in past 2 days