Trans-Asia to double power capacity by 2016 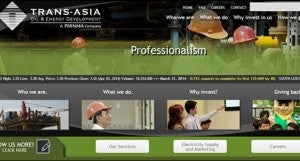 MANILA, Philippines—With its coal and wind power projects soon to take off, Trans-Asia Oil and Energy Development Corp. of the Phinma Group aims to double its power generating capacity by 2016.

Phinma’s flagship company in the energy industry may expand capacity to “close to 500 megawatts” or so by 2016, president and CEO Francisco L. Viray said in an interview on the sidelines of the parent firm’s stockholders meeting.

At present, the firm has 250 megawatts in capacity from its power facilities.

Viray said construction of the company’s 54-megawatt San Lorenzo wind farm should be completed by the third quarter of 2014.

The first phase of the 270-megawatt clean coal project in Calaca, Batangas, may be completed by end-2014, while work on the second phase may wind up by the end of next year. Each phase involves 135 megawatts in capacity. The facility is expected to be fully operational by 2016.

Trans-Asia is ready to expand its power projects as it recently took on financing. The company has signed a P1-billion, 5-year term loan agreement with Security Bank Corp. and a P1.5-billion 10-year corporate note facility with China Banking Corp.

Apart from funding the company’s projects, the proceeds of the loans will be also be used as working capital.

“We’re looking at all opportunities, and [hydropower’s] time has come in our plans,” Viray said.

On gas, Viray said Trans-Asia would explore the development of a 415-megawatt combined cycle power plant in Batangas City. But the company still has to reach an agreement with Pilipinas Shell Petroleum Co., which may provide fuel for the proposed plant.