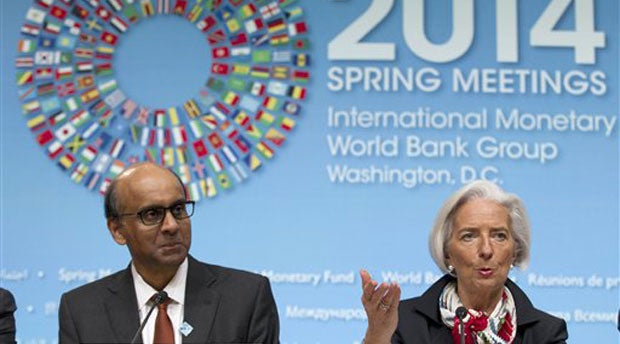 WASHINGTON – The International Monetary Fund has changed and no longer imposes tough “structural adjustment” programs as it did in poor countries two decades ago, IMF chief Christine Lagarde said Saturday.

Told by a journalist from Ghana that many people there had “a phobia for the IMF” due to the harsh conditions of its past structural adjustment programs in Africa and South America, Lagarde responded: “Structural adjustment? That was before my time, I have no idea what it is. We don’t do that anymore.”

The crisis lender is sensitive to charges it dictates socially and economically harsh reforms on countries availing themselves of its support.

In recent years, it has come under heavy criticism for the austerity policies – mostly government spending cuts and tax hikes – that have accompanied its rescue programs for Greece, Portugal and others.

Lagarde, speaking in a press conference during the IMF/World Bank spring meetings in Washington, stressed that the conditions the IMF places now in loan programs are decided together with recipient governments.

“Seriously, you have to realize that we have changed the way in which we offer our financial support,” she added.

“It’s really on the basis of partnership. There is always in partnership a bit of hardship to go with it.”

“If the Fund is called upon to help, it’s because the country feels it cannot decide certain things on it own, it needs back-up support, financing to make sure that it has access to enough funding.”

She added that the IMF also offers countries technical assistance and help building the capacity to manage an economy.

But anti-poverty group Oxfam said the Fund’s programs now are similar to those of the past.

“We hope the IMF’s new narrative on inequality signals that they have indeed left structural adjustment behind. But whatever language they use, they’re still pushing for cuts in public spending which are hitting the poor hardest.”