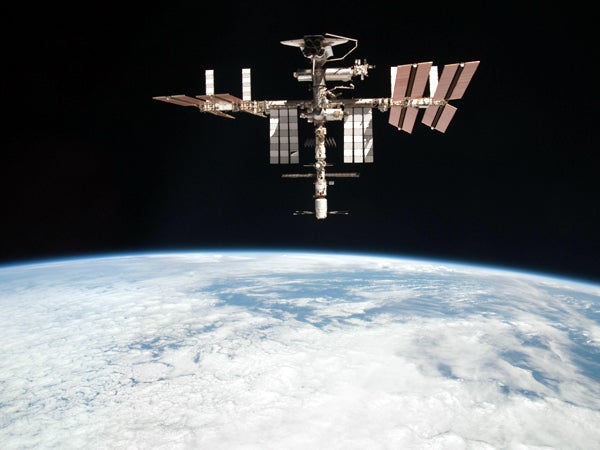 This May 23, 2011 photo released by NASA shows the International Space Station at an altitude of approximately 220 miles above the Earth, taken by Expedition 27 crew member Paolo Nespoli from the Soyuz TMA-20 following its undocking. AP

CAPE CANAVERAL, Florida — A computer outage at the International Space Station may require a spacewalk by astronauts and threatens to delay next week’s launch of a commercial supply ship for NASA.

NASA said Friday night that a backup computer on the outside of the orbiting lab is not responding to commands.

The main computer, called an MDM or multiplexer-demultiplexer, is working fine, and the six-man crew is in no danger, officials said. But these computers control some robotic functions that would be needed for the upcoming supply run by SpaceX, one of two U.S. companies contracted by NASA to keep the space station well stocked. A backup computer would need to be operating for redundancy of those robotic systems.

SpaceX is supposed to launch the unmanned Dragon capsule on Monday from Cape Canaveral. It contains nearly 5,000 pounds (2267.99 kilograms) of supplies and science experiments.

The mission is already a month late because of extra prep time needed by the California company and unrelated damage to an Air Force radar-tracking device needed for rocket launches.

Late Friday, Mission Control was trying to determine whether the computer can be repaired or must be replaced. A replacement would have to be accomplished by spacewalking astronauts.

NASA is still aiming for a Monday launch by SpaceX. But that could change, depending on the status of the bad computer.

Astronauts use the space station’s big robot arm to grab onto the Dragon capsule and attach it to the outpost.

The space station is currently home to two Americans, one Japanese and three Russians.