Turn in your dirty peso bills to banks, says BSP 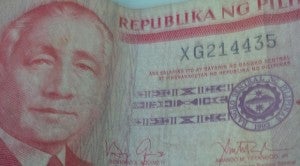 Local banks are now required to accept “mutilated” paper notes and coins from the public and replace them, according to new banking rules published this month

MANILA, Philippines—Local banks are now required to accept “mutilated” paper notes and coins from the public and replace them, according to new banking rules published this month.

The mutilated peso bills and coins, however, will not be replaced immediately. Instead, the notes will be forwarded to the Bangko Sentral ng Pilipinas (BSP), which will determine their authenticity.

The banks will then be allowed to charge their clients for this service, under the provisions of BSP Circular 61-2014.

“(This is) in line with the BSP’s initiative to further strengthen its ability to fulfill its mandate as the issuer of Philippine currency,” the central bank said in a recent statement.

All genuine bills, in particular, will be replaced by the central bank with few exceptions.

Peso bills that have lost part or all of either face of the paper note will be rejected by the BSP.

Notes whose embedded security threads are missing will also be rejected, the BSP said, unless the loss of the threads “appears to be caused by wear and tear, accidental burning, action of water, chemical, bites of rodents and insects, and the like.”

Under the new rules, coins showing signs of corrosion are considered unfit for circulation.

“These amendments to the treatment of unfit and mutilated Philippine peso currency notes and coins were formulated to further facilitate an efficient processing of currency notes and coins deposited by banks in the BSP and submitted by the general public for examination as to their genuineness and redemption value,” the BSP said.—Paolo G. Montecillo