PH does not fear ‘economic backlash’ from China 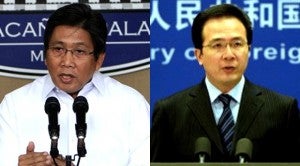 Malacañang on Wednesday said it will protect the country’s national interest, including its economy, in the face of threats from China over maritime disputes in the West Philippine Sea.

“It is the duty of government to promote the welfare of its citizens and to ensure the orderly and stable growth of our national economy,” Communications Secretary Herminio Coloma said in a press briefing.

The statement came a day after Chinese Foreign Ministry spokesperson Hong Lei warned that the Philippines “will have to take the consequences caused by its provocative actions.”

Coloma did not elaborate on how exactly the Aquino administration will address possible sanctions from China, stating instead that its preparations were “a continuing duty of government.”

The Secretary also downplayed China’s pronouncements that the government’s decision to push through with arbitration before the United Nations (UN) International Tribunal for the Law of the Sea (ITLOS) seriously injured the two countries’ bilateral ties.

(Our relationship with the People’s Republic of China has a history based on friendship and cooperation. There are a lot of areas where we can establish and promote the cooperation and friendship between the two countries.)

In February, Finance Secretary Cesar Purisima gave a similar statement, pointing out that the two countries do not have a “one-dimensional relationship.”

China remained one of the country’s biggest trading partners last year amid the ongoing maritime dispute in West Philippine Sea.

China to PH: Provocations have consequences