Bloomberry Resorts posted net loss of P1.3B in 2013 due to Solaire construction 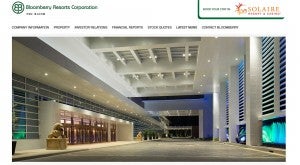 MANILA, Philippines — Bloomberry Resorts Corp. booked a net loss of P1.3 billion in 2013, nearly double the loss incurred in the previous year, due to pre-operating expenses incurred for the development of Solaire Resort & Casino, which opened in mid-March in 2013.

Without the pre-operating expenses worth about P1.05 billion, net loss in 2013 would have narrowed by 80 percent to P267 million, the company told the Philippine Stock Exchange on Monday.

Bloomberry’s cash flow in the first 10 months of operations of Solaire as measured by earnings before interest, taxes, depreciation and amortization (EBITDA) hit P1.12 billion.

“If we add back P1.048 billion in pre-operating expenses, the company’s adjusted EBITDA would be at P2.166 billion for its first 10 months of operation,” Bloomberry said.