Emirates suspends flights to Clark due to jet fuel taxes 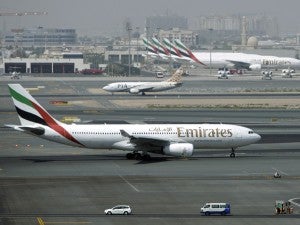 MANILA, Philippines — Emirates Airlines, the largest carrier in the Middle-East, is suspending daily flights to Clark International Airport in Pampanga province on May 1, ending the service in just six months due to controversial jet fuel taxes and intense competition, according to a government official.

The move would prove a temporary blow to Clark Airport, which had high hopes the entry of gulf carriers in 2013 would bolster efforts to establish itself as an alternative gateway to Manila’s Ninoy Aquino International Airport, the country’s busiest airport.

“Emirates is suspending flights on May 1 for a host of reasons,” Clark International Airport Corp. President and CEO Victor Luciano said in an interview on Monday (Mar. 24). He cited Emirates’ worries over the excise tax on jet fuel and the airline’s low passenger load factor, which measured flight occupancy.

Emirates started operations in Clark Airport, located more than an hour’s drive north of Metro Manila, in October 1, 2013, around the time the Philippine carriers were mounting direct flights to the Middle East, one of the major employment hubs for Filipinos seeking work overseas.

Luciano said Emirates’ load factor for the Clark-Dubai service was at about 50 percent, meaning flights were about half full.

He added that while this was anticipated, he noted that the airline had expected more clarity on the issue on excise taxes.

The Supreme Court earlier ruled fuel suppliers would not be allowed to recover excise taxes directly from the government, thus forcing them to increase fuel rates to airlines. These, in turn, will be passed on to passengers via fuel surcharges, which forms part of the ticket price.

The move, industry groups warned, would hurt the government’s tourism goals and might force international carriers to cut flights.

The Joint Foreign Chambers in January called on the Philippine government to scrap excise taxes on jet fuel as it called the country “the most expensive place in Asia to fuel an aircraft.”

The International Air Transport Association (IATA) said in a report in 2013 that passing on the excise tax on jet fuel used for international operations would increase operating costs by 2.4 percent “leading to a decrease in international passengers by over 266,000 per year.”

IATA added that the industry’s overall contribution to Philippine economic growth, as measured by gross domestic product, would be less by $111 million and over 19,000 jobs would no longer be supported “with the largest adverse impacts” on tourism first, then exports.