The administration’s economic managers are scheduled to report today (Tuesday, March 18) on the state of the local economy at the Philippine Economic Briefing to be held at the Philippine International Convention Center.

And President Aquino’s team has much to brag about.

When the second Aquino president assumed office in the middle of 2010, the country was several notches below investment grade, state coffers were nearly depleted, and growth was floundering.

Today, however, the Philippines has become the apple of the world’s eye.

Last year, the Philippines won three investment grade ratings for its foreign-currency sovereign debt. Economic managers are confident the country is due for another round of upgrades this year, given that the country’s IOUs are already priced lower than similarly-rated counterparts.

The country also completed its best two years of economic growth since the 1950s after expanding by 7.2 percent and 6.8 percent in 2012 and 2013, respectively.

Much of the credit for these achievements rightly belongs to the commander-in-chief and his team. The significant improvement in the country’s fiscal house was largely a result of the Finance department’s efforts to close loopholes, run after tax cheats, and improve liability management.

Notably, the administration also successfully pushed for the passage of higher taxes on alcohol and tobacco products, despite stiff opposition, bolstering the perception that President Aquino was willing to spend his political capital to get things done.

This has freed up resources that have allowed the government to increase spending on infrastructure and social services.

The government has also succeeded in improving the ease of doing business in the country by cutting red tape, reducing the time needed for entrepreneurs to get their businesses up and running.

Last year, the World Bank tagged the Philippines as the “most improved” in the multilateral lender’s annual “Ease of Doing Business” report. The Philippines posted a 30-spot jump in its rank, which now stands at 103th in the world from 138th.

But now is not the moment for President Aquino to rest on his laurels. Much still needs to be done.

Unemployment remains stubbornly high at over 7 percent. In January, unemployment reached 7.5 percent, which was just marginally better than the 8 percent rate left by the previous administration.

The country’s flagship Public Private Partnership (PPP) infrastructure program, which was once a source of pride, is now mostly just the subject of ridicule.

Several PPP projects were initially listed to be offered to the private sector in 2010. This initial list was thrown out and most of the projects were replaced. To date, only one project—a puny 4-kilometer, P2.01-billion tollroad—has been successfully bid out.

Bigger ones, such as the P17.5-billion redevelopment of the Mactan Cebu International Airport, and the  P60-billion Light Rail Transit line 1 Cavite Extension are already on the auction block but have been delayed due to various issues.

Like it or not, Mr. Aquino’s legacy in infrastructure will be determined by the success of these major PPPs.

As if the list of things to do was not long enough, the President also has to deal with the reconstruction of areas affected by Typhoon “Yolanda” in November of last year. Given the government’s spotty record when it comes to implementing big projects, as seen in the way it has handled PPPs, many remain concerned over the fate of cities like Tacloban.

“Kayo ang boss ko,” Mr. Aquino bravely told the public when he assumed office in 2010. In private companies, CEOs stand before shareholders every year to report on the progress their companies have made in the last year, and reveal plans for the next 12 months.

In this special report, the Inquirer lists down promises that the President made during his State of the Nation Addresses (Sona) over the last four years, and the progress the government has made, if any, to fulfill those promises. 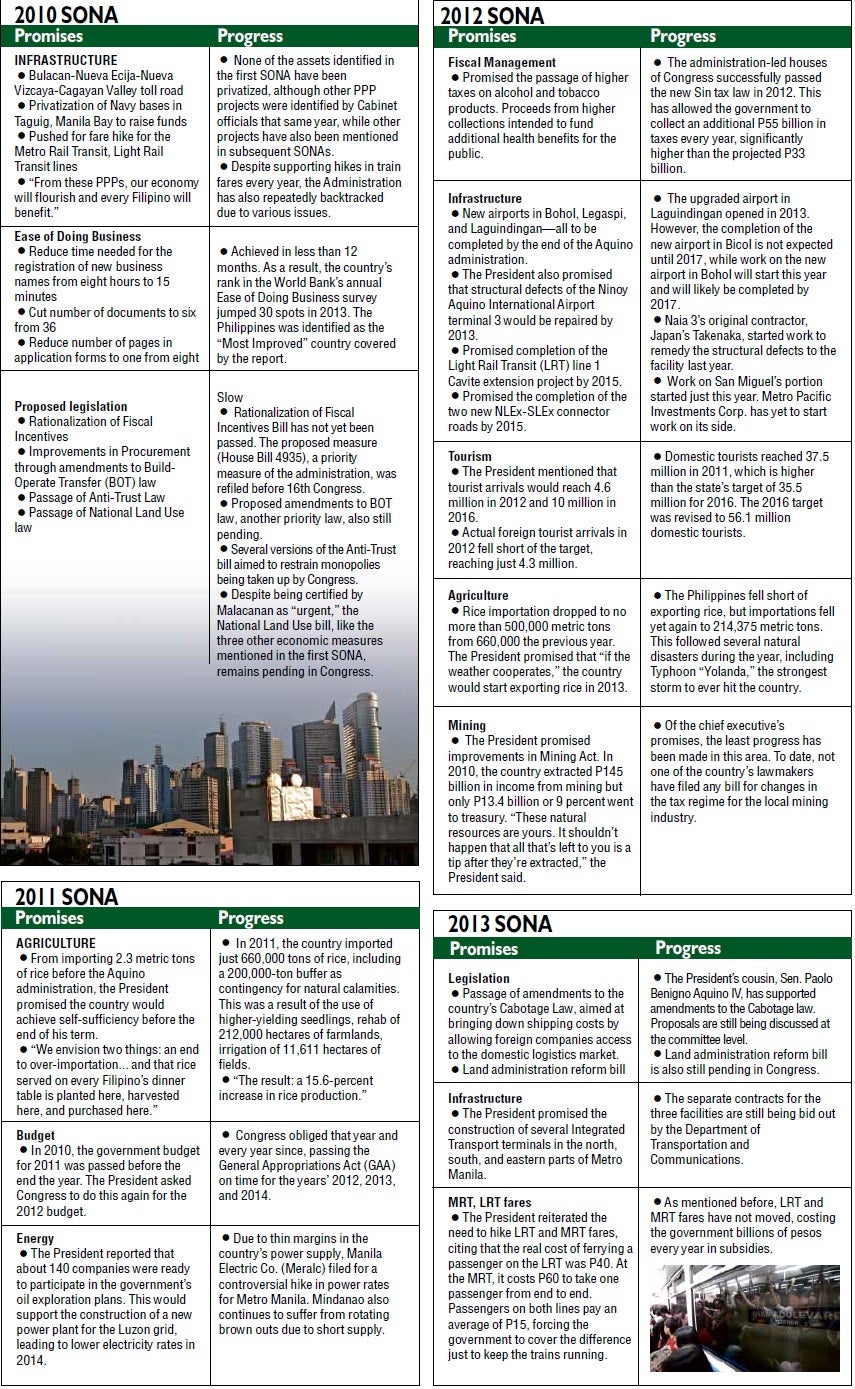