A symptom of the greater problem in health system 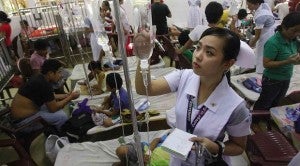 NURSES tend to more than a hundred dengue-stricken patients at the Quirino Memorial Hospital in Quezon City during an outbreak in August 2011. FILE PHOTO

Florizel Tambio was a volunteer at a government hospital when she applied in the Nurse Deployment Program of the Department of Health last year.

Now, she is in charge of one of six barangay health stations in Sanchez Mira, a third-class municipality in Cagayan, responsible for three barangays whose population totals around 3,000 to 4,000, though they are not geographically connected.

Three days a week, she goes to the field to administer vaccinations, vitamins, emergency drugs, deworming and other health programs. On the first week of the following month, she prepares her monthly report, which she must deliver to Tuguegarao City three hours away, to receive her salary.

The Nurse Deployment Program, which sends nurses to serve in rural areas for two years, is an initiative of the DOH to help address the lack of health workers in rural areas, especially in Gidas (geographically isolated and disadvantaged areas) like in Cordillera Autonomous Region and  Mimaropa (Occidental and Oriental Mindoros, Marinduque, Romblon and Palawan).

For the DOH, the lack of health workers is only a symptom of the problems besetting the healthcare system. For Health Undersecretary Teodoro Herbosa, the real problem lies on the distribution of health workers.

Nurses are the “silent heroes of the healthcare system,” Ang Nars party-list Rep. Leah Paquiz said. Pushing to have nurses for every barangay health center and public school clinic for the delivery of quality primary healthcare, she envisioned to “make the nursing sector an effective partner of the government toward nation-building.”

But as of 2012, 221,323 out of 421,467 nurses who passed the Board were unemployed, according to the Philippine HRH Master Plan and Nursing Workforce Management of the Institute of Health Policy and Development Studies, University of the Philippines Manila-National Institutes of Health. It estimated that from 2001 to 2011 there were 132,943 overseas-employed nurses, and only 67,202 were locally employed.

Many nurses are forced to leave the country in search of better opportunities, Paquiz said, and those who stay have to face numerous challenges. “Many hospitals are understaffed; a nurse can expect to handle 20 to 30 patients.” She added that they can expect to have meager or no hazard pay and travel allowance; an unsupportive work environment; massive multitasking without focus on nursing outcomes; and, since highly skilled nurses are in short supply, trainings and certification programs “shortcuted.” “Quality care is compromised as a result.”

Paquiz is skeptical of the Nurse Deployment Program and the Doctors to the Barrios, noting that they are mostly only “temporary”—as in the case of the NDP and the DTTB, which employs health workers for only two years. Salary and other forms of compensation are not that competitive, she added. “The gap between what a health worker in government gets compared to one in  the private sector is too wide.”

To fix the healthcare delivery system, Paquiz said: “We should first fix health human resource. The workforce needs to be nurtured, especially on the provision for competitive working conditions, including on the salary and nonmonetary perks.”

At the Philippine College of Physicians Health Forum on Feb. 11, Philippine Society of General Internal Medicine president Dr. Antonio Dans said there is a need to retrain and redistribute health workers, as well as to reassess the direction of present health policy.

Is the healthcare workforce ready?

Dans pointed out that because of the Sin Tax Law, “poor Filipinos can now be assured of coverage by the National Health Insurance System and the upgrading of healthcare facilities.” But he asked: “Is the Philippines’ healthcare workforce ready to handle the healthcare needs of these millions of Filipinos?”

For Herbosa, the solution lies in the hands of the LGUs, since under the Local Government Code, primary and secondary care is their responsibility. “Barangay health stations and rural health units are handled by the mayors, and district and provincial hospitals and others are handled by governors, only regional hospitals and large-scale hospitals are under us.”

Herbosa recommended that LGUs spearhead initiatives to recruit more health workers like giving scholarships to promising students. “They should have this mantra: Good healthcare is good politics. When the government cares for the poor, it is able to deliver quality services.”