US stocks mixed as markets keep eye on Ukraine 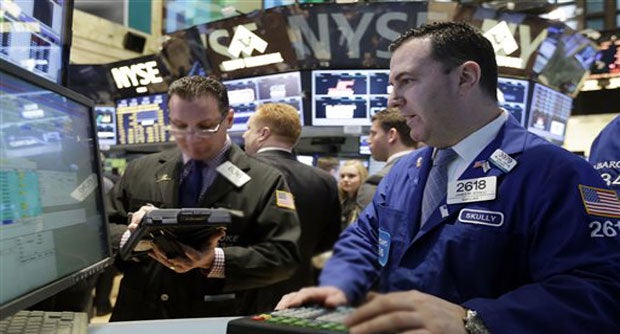 Trader Edward Curran, left, and specialist James Sciulli work on the floor of the New York Stock Exchange, Wednesday, March 12, 2014. US stocks finished mixed Wednesday as cautious investors kept an eye on the Ukraine crisis and awaited more information on the direction of the economy. AP

NEW YORK—US stocks finished mixed Wednesday as cautious investors kept an eye on the Ukraine crisis and awaited more information on the direction of the economy.

“Investors are cautious… as global economic and geopolitical concerns cast a shadow on Wall Street,” said a market note from Wells Fargo Advisors.

“Specifically, uncertainty over upcoming Chinese economic data and tensions between Russia and the Ukraine are weighing on stocks.”

“The two headlines stories driving the market are China and perhaps still some thought about what is going on in Ukraine,” said David Levy of Kenjol Capital Management, echoing the concern about whether China is still slowing down.

But Levy noted that US markets still appear to have a firm floor in them, after the S&P 500 hit a fresh record last week.

“Lately any time we have the slightest pullback, we can’t seem to pull the string together for multiple down days. It continues to show the strength of the market,” he said.

Nutrition product company Herbalife sank 7.4 percent as the Federal Trade Commission launched a probe into its business operations. Its rival Nu Skin got a lift from the news, gaining 6.5 percent.

Shares in EPL Oil and Gas jumped 28.8 percent after Energy XXI said it will buy the company for $2.3 billion, a deal that will create a larger independent specializing in offshore production in the Gulf of Mexico. Energy XXI shares were down 7.8 percent.

The company blamed a $30.4 million quarterly loss on extreme winter weather for depressing shopping traffic and heavy promotions from competitors.

Reports that the US Justice Department would investigate General Motors’s slow decision to recall 1.6 million cars despite 10 years of complaints over dangerous ignition problems sent the stock falling 0.9 percent, after Tuesday’s 5.2 percent tumble.

Bond prices rose. The yield on the 10-year US Treasury fell to 2.73 percent from 2.77 percent, while the 30-year declined to 3.67 percent from 3.71 percent. Bond prices and yields move inversely.