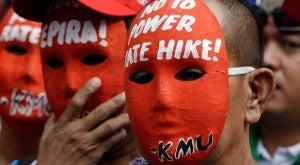 Protesters wear masks as they hold a rally at the Philippine Supreme Court to coincide with the oral arguments on the power rates hike petition of Meralco, the country’s largest electric power distributor, Tuesday, Jan. 21, 2014 in Manila. AP FILE PHOTO

Manila Electric Co. (Meralco) on Wednesday said it would refund any excess amount should an order from the Energy Regulatory Commission (ERC) to recalculate electricity spot market prices cut the generation cost and other pass-on charges that it had collected from its 5.3 million customers.

But William S. Pamintuan, Meralco first vice president, said the utility firm would charge customers an additional amount if the recalculation resulted in an amount higher than the P5.67 per kilowatt-hour that was collected in December and January.

“We assure our customers that the computation on the recalculation of the generation charge will be transparent,” said Meralco spokesperson Joe R. Zaldarriaga.

The ERC announced on Tuesday that it had issued an order voiding spot market prices, which drove up generation charges and related taxes in December and January, because these were not reasonable, rational and competitive.

Militant lawmakers on Wednesday said the ERC had failed to recommend the proper penalties against those who had played a part in jacking up electricity prices.

The ERC ruling covers spot market prices in Luzon, which means distributors except Meralco may immediately refund customers. Meralco is facing a temporary restraining order (TRO) on its December billing.

The high spot market prices came in the wake of the simultaneous shutdowns of power plants while the Malampaya gas plant, which provides cheaper natural gas to Meralco suppliers, was shuttered for maintenance from Nov. 11 to Dec. 10, 2013.

Lawmakers and the Department of Energy have accused power producers of collusion in the simultaneous shutdowns that jacked up electricity prices.

The ERC order of March 3 effectively canceled its approval last December of a staggered P4.15 per kWh rate increase in generation charge that Meralco had sought to pass on to customers.

Based on ERC’s own simulation, the WESM prices for the period may drop by “more than half.” The final pricing, however, will depend on PEMC’s recalculated rate, according to ERC Executive Director Francis Saturnino Juan.

Failure to do job

By ordering a recalculation of spot market rates, ERC officials admitted their failure to do their job, lawmakers said.

“They agreed to the P4.15 per kWh, and now they’re saying this should be recalculated. Are they then admitting they made a mistake?” Sen. Ralph Recto said in an interview.

Senate Majority Leader Alan Peter Cayetano was more forthcoming: “There’s really a failure in the way we regulate the prices of power. We should still take a second look. I’m afraid it will happen again.”

At a press briefing, Tinio said the violation could be an abuse of market power, which has the prescribed penalty of imprisonment and fines ranging from P10,000 to P10 million.

If the ERC commissioners cannot do their job, they should resign, he added.

In a statement, Bayan Muna Rep. Neri Colmenares branded the ERC ruling as a damage control tool to mitigate public outrage against neglect of its duty.

But Colmenares also said the decision was not enough. “The ERC decision will still reward Meralco and the generation companies with rate increases and higher profits when they should be punished and penalized for violating laws,” he said.

Meralco had sought to pass on the P4.15 per kWh increase in the generation cost last December but the Supreme Court issued a TRO on the rate increase.

For January, the generation charges and related taxes were capped at P5.67 per kWh even without the TRO instead of the actual P10.23 per kWh. Meralco said this was in deference to the TRO on the December rates.

Of the P4.15 per kWh rate increase last December that was deferred, generation charges accounted for P3.44 per kWh and the rest were from taxes and related charges.

In January, of the generation charge increase of P4.56 per kWh, the P3.60 per kWh was attributed to spot market prices. The rest came from the cost of bilateral contracts and the fuel costs of three plants supplied by the Malampaya gas platform (which went on maintenance shutdown) that had to use more expensive alternative fuel.

The state-imposed recalculation of spot prices means the WESM component of the generation cost and related charges will also go down, ERC said.

The WESM prices last year seemed to be “unjustified” and “not competitive,” Juan said, considering the many plant outages and “underoffers” of power capacity during the supply period. The ERC also ordered PEMC to issue a new billing to Meralco seven days from March 11.

The PEMC declined to comment except to say that it would comply with the regulators’ order to recompute and impose this “regulated pricing.”

PEMC president Melinda Ocampo said in a text message: “We will abide by the order of ERC. We were given seven days and we will comply.”