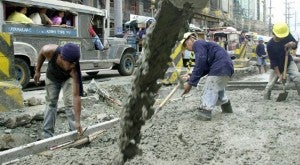 Amid fluctuations noted in the prices of cement products, prices of basic and prime commodities have generally remained stable in the first two months of the year, the Department of Trade and Industry said on Thursday. AFP FILE PHOTO

MANILA, Philippines—Prices of basic and prime commodities have generally remained stable in the first two months of the year amid fluctuations noted in the prices of cement products, the Department of Trade and Industry said on Thursday.

“We issued new suggested retail prices for February showing that prices of major products were stable. There was no movement in flour and bread prices, as well as in sardines, vegetables, tomatoes, chicken and pork. There are, so far, no problems with the sardines industry although we will assess their situation given the electricity problem in Mindanao,” Trade Undersecretary Victorio Mario A. Dimagiba said in a briefing.

Bread makers are expected to come up with “buy-one, take-one” type of promos, which may be implemented by flour producers as well, Dimagiba said. Rice prices meanwhile also remained firm, while a slight increase in the prices of condensed and processed milk was seen.

Cement prices in early February also showed an increase to about P225 per 40-kilogram bag, but were adjusted before the end of last month, with the amount reduced by P3 per bag, Dimagiba said.

“Here we can see market competition working,” Dimagiba said of the price adjustments.

The trade official added the price freeze should remain in force in the calamity-stricken areas and urged consumers to report any unwarranted adjustments in the prices of basic products, which included canned sardines, processed, evaporated powdered and condensed milk, coffee refill, detergent and laundry soap, bread, instant noodles, and bottled, purified mineralized and distilled water.