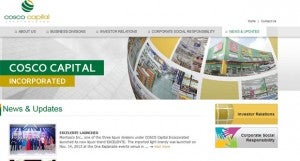 MANILA, Philippines – Cosco Capital Inc. is continuing to expand into other retailing formats outside of flagship Puregold Price Club Inc. with a deal to acquire the largest mall in Cabanatuan, Nueva Ecija.

In a disclosure to the Philippine Stock Exchange on Monday, Cosco announced a deal to acquire 100 percent of NE Pacific Shopping Centers, which is partly owned by infrastructure holding firm Metro Pacific Investments Corp. (MPIC).

MPIC said in a separate disclosure that it had sold all of its shares in NE Pacific, representing 36.89 percent of the issued and outstanding capital stock, to Cosco.

The stake in NE Pacific, MPIC said, was part of its non-core assets. Cosco also acquired the remaining shares from the other shareholders.

Office Warehouse, which has about 47 stores, is the biggest retailing platform of the Lorenzana family.

Cosco is expanding into specialty retail as differentiated from its heavy engagement in food retail represented by Puregold as part of its bid to broaden its market base.

Once a purely oil, gas and mining company called Alcorn Gold Resources Corp., Cosco was transformed by Co into a holding company for the  bulk of his businesses.

The assets injected into this company consisted of the following: 51 percent stake in the country’s second largest grocery operator Puregold, an array of liquor distribution companies, a portfolio of commercial real estate companies and an oil storage business (Pure Petroleum Corp.)