Now is best time to do it, the President tells Malaysian traders
By: Tarra Quismundo - Reporter / @TarraINQ
Philippine Daily Inquirer / 01:25 AM March 02, 2014 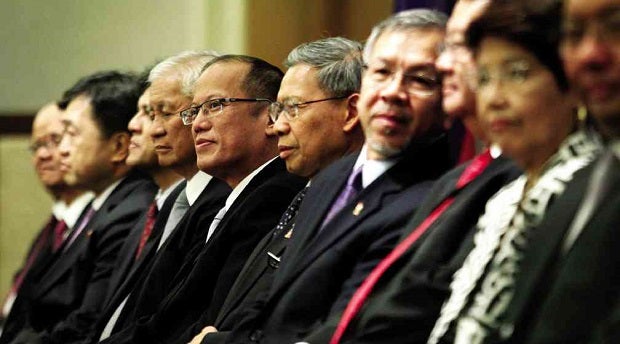 PRESIDENT Aquino attends the Business Opportunities Forum with Malaysian businessmen at Mandarin Oriental Hotel in Kuala Lumpur on Friday, on the sidelines of his two-day state visit to Malaysia this week. MALACAÑANG PHOTO

KUALA LUMPUR—With peace at hand in Mindanao, President Benigno Aquino III on Friday invited the Malaysian business community to invest in the region, citing how government reforms and a fairer business climate have led to an economic revival in the Philippines in recent years.

Addressing about 200 of Malaysia’s top businessmen, Mr. Aquino said the Philippines was past its days as a “laggard” and “the sick man of Asia,” with its economic rise recognized internationally through credit ratings upgrades and renewed global interest.

“Mindanao … has land so fertile that a patch of it left unattended for a short while becomes quickly overgrown. Now that lasting peace in that particular region has come within reach, perhaps investing this early in Mindanao is an opportunity that is presenting itself to all of us,” Mr. Aquino said.

“Now, you are presented with another opportunity to reap the maximum gains from a country that is experiencing rapid growth, and is set to sustain [that] growth over many years. May I pose this question: Is anyone here really willing to pass up this opportunity and set [themselves] up for regret somewhere down the line?” he said.

Mr. Aquino invited Malaysian Prime Minister Najib Razak to come to Manila by the end of this month to witness the signing of the Comprehensive Peace Agreement on the Bangsamoro, the culmination of 16 years of negotiations to end decades of conflict in Mindanao and bring development and progress to the region.

“Through political will, the determination to bring about lasting peace and stability, and mutual trust among all stakeholders and, with the help of partners like Malaysia, the Filipino people are on the cusp of lasting peace in Muslim Mindanao: Peace that will likewise open the floodgates of opportunity for the provinces in that region,” Mr. Aquino said.

Pressing his suit, the President cited how his administration had risen to the challenge of “reversing 10 years of lost opportunities and transforming [the] government from the inside out,” a reference to the corrupt and elitist rule of former President Gloria Macapagal-Arroyo, who now holds the seat of the second district of Pampanga province in the House of Representatives.

On track to restore “a grand house that had fallen in disrepair,” Mr. Aquino said the last four years of his administration had seen a crackdown on corruption, a streamlining of the system of doing business, higher infrastructure spending, efforts to improve the education system to develop a better-skilled workforce and a move beyond the Philippines’ “traditional strengths” in the service sector through forays into the infrastructure, agriculture and tourism industries.

“Today, almost four years down the line, some may be asking: Where did those early efforts lead? The answer: A government that works with and for the people, and a reenergized nation that enjoys the goodwill and respect of the world,” the President said.

He said the Philippines was staying the course despite setbacks such as the devastation caused by Supertyphoon “Yolanda” (international name: Haiyan) in November, which left vast swaths of the Visayas region in need of billions of dollars in investment to restore infrastructure and basic services.

“In the wake of Haiyan’s destruction, our government is determined not just to restore normalcy but we intend to build back better … We are working precisely so that Haiyan-affected communities rise from the rubble as stronger, more vibrant, more inclusive areas of opportunity,” he said.

Mr. Aquino also spoke about what awaited investors in the Philippines: World-class amenities and a welcoming people.

He cited the ease of traveling to the country, with an aviation industry now opening direct routes to more cities around the world.

“With this in mind, let me invite all of you to come and visit the Philippines. It is certainly easier to do so today, since our government has already liberalized the aviation industry and enacted legislation that [would] entice more carriers to open or expand operations there,” Mr. Aquino said.

During the state visit, Communications Secretary Herminio Coloma announced Malaysian company Maybank’s plan to expand its presence in the Philippines, with fresh investment of up to P300 million to open new branches across the Visayas and Mindanao.

AirAsia CEO Tony Fernandes expressed interest to work with the Philippine government in developing the old domestic air terminal in Pasay City and airports in other major tourist destinations in the country.

Genting Berhad, the company that brought the Resorts World franchise to Manila, accepted President Aquino’s offer to make the Philippines a stop on its Star Cruises route.

The engagement with the Malaysian businessmen was part of Mr. Aquino’s effort to enhance trade between Kuala Lumpur and Manila, an aspect of relations that Malaysia and the Philippines agreed to further develop during bilateral meetings on Friday.

In a joint press conference, Najib noted the “far greater” potential to increase the current level of two-way trade between Malaysia and the Philippines, pegged at $4.5 billion. The two sides agreed to boost cooperation in Islamic finance and Halal, among other areas.

President Aquino left for Manila aboard a chartered Philippine Airlines flight at 11:20 p.m. Friday, departing soon after being honored in a state banquet thrown by Malaysia’s King Abdul Halim at the Istana Negara, the royal palace.

The President arrived home around 3 a.m. Saturday, finally completing his travel checklist covering all the nine other members of the Association of Southeast Asian Nations.

Report to the nation

Upon his arrival, Mr. Aquino reported to the nation the gains from his trip to Malaysia, including signed bilateral agreements on education and culture, the consensus to boost defense cooperation, and Malaysia’s commitment to continue supporting the implementation of the government-MILF peace agreement.

The Philippines and Malaysia also agreed to uphold international law and maintain a peaceful approach to resolving conflicting claims in the South China Sea, the cause of tensions between China and its neighbors Vietnam, Malaysia, the Philippines, Brunei and Taiwan.

The President also reported his engagement with the Filipino community in Kuala Lumpur, particularly how a group of Filipinos, led by architect Bart Vista, volunteered their time and spent P11 million of their own money to refurbish the Philippine Embassy here back in 2012.

Aquino to ARMM: Change within our reach