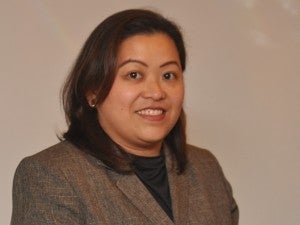 Aileen C. Clemente, executive vice president of the Tourism Congress and president of Rajah Travel Corp., says the arrivals targets of 6.8 million for this year and 10 million by 2016 are achievable as long as the government will work hard to “remove the [tourism] barriers in a timely manner.”

The Philippine government must address critical problems in infrastructure, regulatory regime as well as education to enable the country to meet its target tourist arrivals of 6.8 million for this year and 10 million by 2016, an industry official said Thursday.

Aileen C. Clemente, executive vice president of the Tourism Congress and president of Rajah Travel Corp., said that the targets were achievable as long as the government would work hard to “remove the barriers in a timely manner.”

These barriers, she said, included inadequate infrastructure such as roads, airports and rooms; the excise tax on jet fuel; and the moratorium on hospitality courses, among others.

The excise tax on jet fuel alone has already made Manila “the most expensive place in Asia to fuel an aircraft” as aviation fuel suppliers have no choice but to pass on the higher costs to foreign carriers. The tax on jet fuel threatens the tourism targets of the Aquino administration and may put a dent on the country’s effort to improve competitiveness.

“If we continue to tax airlines in …. whatever way or form, we’re just increasing the prices because that’s part of the cost of doing business. We should also note that there is what we call reciprocity country to country, which means that, what airlines enjoy in one country, they enjoy in another. Fuel has no excise tax in the countries where the airlines come from, so why is it that they are being taxed here,” Clemente said.

The excise tax on jet fuel “is another barrier to entry. That’s why airlines, strategically, will most likely stop in a neighboring country, therefore removing the direct flight. So if they cannot conveniently come here, we are setting ourselves to be outcompeted,” she explained.

The balance of demand and supply in infrastructure is another concern, she noted.

“Will our roads be able to carry the number of tourists we want? Will the planes be able to land on the airports to get that capacity, when they (tourists) start coming in especially with the economic integration?” Clemente asked.

Also, she criticized the moratorium on hospitality courses, where a quota had been set on the number of enrollees.

“There are a lot of jobs open,” Clemente said, referring to those who took up the courses.

Despite these barriers, Clemente believes that the Philippines is ready for the upcoming establishment of the Asean Economic Community by end 2015.

Following the integration, the AEC will have a single market and distribution base. Simply put, the integration allows Asean companies in 10 Asean member-nations to enter each other’s markets, encouraged by zero tariffs and reduced bureaucratic clearances.

Clemente, however, pointed out the need to have clear-cut metrics to guide tourism related industries to prepare for the surge in tourist arrivals, as there were no clear objectives or goals, other than the number targets presented by the government.  Amy R. Remo