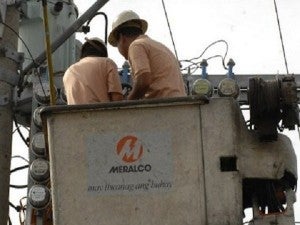 The People Opposed to Warrantless Electricity Rates, a multisectoral coalition, warned that the TRO only pertained to the P4.15 per kilowatt-hour increase for the generation charge last November.

The group said it only recently learned that Meralco had also filed a petition before the Energy Regulatory Commission for a P5.33 hike per kWh for the January billing period.

“We were too focused on the P4.15 hike, we were then not aware of the P5.33, which may turn out to be more damaging to us,” said Bayan Muna party-list Rep. Neri Colmenares, one of the petitioners against the Meralco rate increase, in an assembly in Quezon City on Saturday.

Teddy Casiño, a former Bayan Muna representative, said consumers were in danger of having to battle a P9 per kWh hike if the two proposed increases pushed through.

Pete Ilagan, president of the National Association of Electricity Consumers for Reforms Inc., said  Meralco did not fulfill its promise to refund the rate increase which was covered by the TRO.

“If you look at your December, January bills, it would appear that Meralco did not return the hike that they billed,” he said.

The group also slammed the failure of the Electric Power Industry Reform Act (Epira) to provide a steady supply of electricity at cheaper rates.

“Epira has failed us for 12 years, it is about time that we turn off the lights on Epira,” Colmenares said.

Renato Reyes, secretary general of Bagong Alyansang Makabayan, called on Meralco consumers to join them in fighting the power hike before the ERC.

Ordinary electricity consumers, he said, may file petitions for intervention to signify their opposition to the unjust rate increases.

“This will show the ERC that there are indeed many of us who are fed up,” he said.

Colmenares, meanwhile, warned of the inflationary impact the power hike will have on the economy.

“The prices of commodities will of course go up. Unlike the Meralco rate increases which could be refunded if needed, you cannot go to the store and ask for a refund because the price was inflated,” he said.

Power consumers to get P180M refund