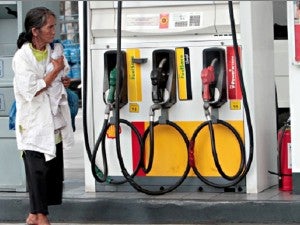 MANILA, Philippines—Pilipinas Shell Petroleum Corp. still has not come up with a decision on plans to list on the Philippine Stock Exchange, and the Department of Energy (DOE) is now but a few steps shy of taking legal action.

The energy firm needs to undertake an initial public offering, as mandated by the Oil Industry Deregulation Act, to give the public more investment choices.

Energy Secretary Carlos Jericho L. Petilla said that the government has given Shell time to finish viability studies, after which it would impose the required offering of shares to the public.

“We will insist (on the IPO) soonest because it is under the law, unless they have a valid reason for seeking an extension,” Petilla said.

If Shell would not bare its IPO plans soon, the DOE would “review” what legal actions it could take.

But Petilla has expressed optimism that Shell would remain “serious” in its Philippine business despite biding its time on the IPO.

Edgar O. Chua, country chair of Shell Companies in the Philippines, said it could take two or three months for the company to come up with a final investment decision (FID) for its refinery upgrade.

This is a critical milestone since the company’s IPO plans would depend on the FID, aside from market conditions, Chua explained.

In the meantime, Shell has completed the feasibility study for the upgrade, which will ensure supply security and for which proceeds of the potential IPO will be used.

The DOE has been urging Shell to update its IPO plans, which is long overdue, since it received the mandate under the Oil Industry Deregulation Act of 1998. The law states that an oil firm with a refinery must offer 10 percent of its shares to the public.

Zenaida Y. Monsada, director of the DOE’s Oil Industry Management Bureau, said that the equity and financial markets are currently healthy and therefore potentially attractive to prospective investors of Shell.

During the 2007 Asian financial crisis, Shell cited the volatile stock market in mulling over its IPO plans. Following the Department of Environment and Natural Resources’ 2010 directive on the upgrade of vehicle emission standards on Jan. 1, 2016, Shell started studying the Euro IV fuel compliance. In 2013, Shell asked the DOE to give the oil firm until the yearend to decide on the IPO.