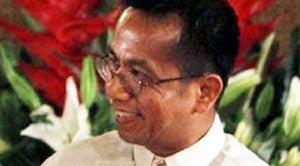 But Balisacan said the country would have to sustain its gross domestic product (GDP) growth targets “over a long period”—meaning in the next five to 20 years—to “allow us to really see a major reduction in poverty.”

“Economic growth is necessary but not sufficient for poverty reduction,” he said in a press conference in Malacañang, referring to “lessons” during the first three years of implementing the Philippine Development Plan (PDP).

At present, there are 10 provinces that “have been experiencing economic growth, but the poorest families are being left behind.” Balisacan said one reason could be that “the growing sectors do not require the goods or services that the poor can provide.”

“Worse, migrants are being attracted into these cities or provinces, but they too, are unable to participate in the growth process,” he said, citing Zamboanga del Sur, Cebu, Pangasinan, Negros Occidental, Camarines Sur, Leyte, Iloilo, Sulu, Quezon, and Davao del Sur.

“These provinces, which we have labeled as Category 1 provinces, have very high numbers of the poor, although the incidence of poverty is not very high,” he said.

“Growth and employment opportunities in these provinces need to increase even more.”

Ten “Category 2” provinces “are being left out of the growth process altogether,” the secretary said.

“Very sparsely populated and remotely located,” they are “confronted with weather disturbances and armed conflict that reinforce the state of under-development,” he added.

“Increasing small businesses that are agriculture-based and are more connected to service providers in more developed areas of the region should be promoted,” Balisacan said. “This is a way of creating jobs and ensuring incomes.”

A total of 30 provinces under “Category 3” have been “exposed and prone to multiple hazards, such as landslides and flooding,” he said.

“In these provinces, the marginally non-poor people can quickly slide into poverty due to shocks or natural disasters,” he warned.

“The objective, therefore, is to make them resilient especially to the impact of natural disasters.  These involve updating the geohazard maps, land use plans and even their local development plans.  Residents also need to be trained on disaster response.”

Factored in the economic targets are calamities that might occur along the way. Balisacan said GDP growth projections in the next two years “would be greater if not for those disasters.”

“Disasters can negate the gains and even push back development,” he said.

“Our country is geographically located in such a way that we unfortunately have more of those typhoons and perhaps even droughts. But if we succeed in addressing these problems we outlined, we should be able to move on and still join our neighbors in terms of prosperity.”

“Overall, the ultimate goal of the updated Plan is inclusive growth.”

Aquino on rise in joblessness: What went wrong?

Read Next
PSEi up for 2nd straight session on news of resilient US stocks
EDITORS' PICK
COVID-19 cases in PH pass 3.2 million mark with 37,154 new cases — DOH
Metro Manila’s daily COVID-19 growth rate drops to 2% — Octa Research
SMDC’s Bloom Residences: A master planned community that cares for your health and wellness
Upsilon, Unilever give ‘real talk’ on climate change crisis
Over 3 Million worth of prizes to be won at Smart Padala’s SENDali Manalo Promo!
Novak Djokovic loses fight against Australia deportation
MOST READ
‘Not my loss’: Did Kris Aquino just comment on her breakup with Mel Sarmiento?
Ivana Alawi tests positive for COVID-19, urges public to comply with health protocols: ‘No one’s above the law’
Thailand records first Omicron death
Novak Djokovic loses fight against Australia deportation
Don't miss out on the latest news and information.