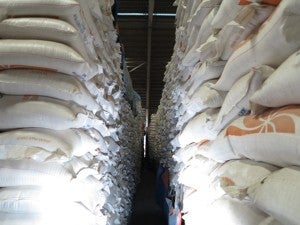 MANILA, Philippines—The government’s failure to curb smuggling has severely hurt legitimate businesses in the agriculture sector in terms of unfair competition from smuggled products, according to a group of farm producers.

At the same time, the government has suffered about P64 billion in forgone revenue over the past two years as a result of the rampant smuggling of rice, vegetables, meat and other agricultural products, said the Samahang Industriya ng Agrikultura (Sinag).

The group placed the forgone revenue at P32 billion in 2012 and at almost the same amount last year.

Jayson Cainglet, a spokesman for Sinag, said the group was calling on the government to put more teeth to its antismuggling drive to deal with the adverse impact of smuggling on the economy, particularly the agriculture sector.

An umbrella organization of various agricultural groups, Sinag has members from the rice, livestock and poultry, and fisheries subsectors.

Rosendo So, a member of Sinag and director of Titan Agricultural Products Inc., said the estimates of government losses from smuggling were based on a comparison of export data released by other countries and the import data reported by the Philippine government.

“There has always been a significant disparity between what exporting countries report and our [Philippines’] import figures,” So said in a roundtable discussion with Inquirer reporters and editors on Wednesday night.

So cited rice, which he said was one of the most commonly smuggled agriculture products.

In 2012, exporting countries reported a total of 1.3 million metric tons of rice sold to the Philippines, but government data showed only 600,000 MT were imported that year, Sinag said.

Of vegetables, the most commonly smuggled were onions, which the group suspects may be coming from Taiwan and China.

Cainglet said pork was the most commonly smuggled meat and that this came most likely from the United States, Canada and several European countries.

Forgone revenue from smuggling and other problems like tax evasion and inefficiency in tax collection are blamed largely for the government’s budget deficit, which stood at P242 billion in 2012.

Cainglet said smuggling was compounding the problems of the agriculture sector, which is already facing other challenges, including declining tariffs on imported goods, lack of technology and facilities, and huge subsidies enjoyed by agriculture sectors in countries that export to the Philippines.

“Notwithstanding the gains and various plans envisioned for the agriculture sector, several issues have prevented it from fully realizing its goals,” Cainglet said.

Sinag has called on the Bureau of Customs (BOC), which has a new leadership, to implement more effective measures against smuggling.

The BOC is now headed by Commissioner John Phillip Sevilla, who was appointed late last year to replace Rufino Biazon.

Sevilla, a former finance undersecretary, was assigned to head the BOC as the Aquino administration vowed to institute reforms in the bureau, tagged as the most corrupt among line agencies.

Cainglet said rampant smuggling of rice, vegetables, meat and other products was dragging growth in the agriculture sector, which employs about a third of the country’s workforce.

He echoed observations by economists that the poverty incidence in the country remained significant largely because of the poor performance of the agriculture sector.

Data from the Philippine Statistical Authority showed that growth in the agriculture sector slowed to 1.1 percent in 2013 from an already anemic 2.8 percent in 2012.

The agriculture sector’s growth was much slower than the 7.1 percent for services and the 9.5 percent for industry.

Socioeconomic Planning Secretary Arsenio Balisacan earlier said the Philippines so far had failed to substantially reduce poverty incidence despite the robust growth of its economy because of low agriculture productivity.

Given that the agriculture sector accounts for a third of the country’s estimated 40-million workforce, Balisacan said initiatives that would boost productivity and employment in the sector should be pursued.

Balisacan said the government intended to do just that. He said the updated medium-term Philippine Development Plan through 2016, expected to be released next month, would include higher government investments in the agriculture sector.

For Sinag, however, development initiatives for the agriculture sector should go hand in hand with strict measures against smuggling.

Durian Tan, a member of Sinag, said in the roundtable discussion that the group was hoping that the BOC would be able to implement more effective programs against smuggling under its new leadership.

“We don’t know him (Customs Commissioner Sevilla), but hopefully he would be a better performer than the previous commissioners,” she said.