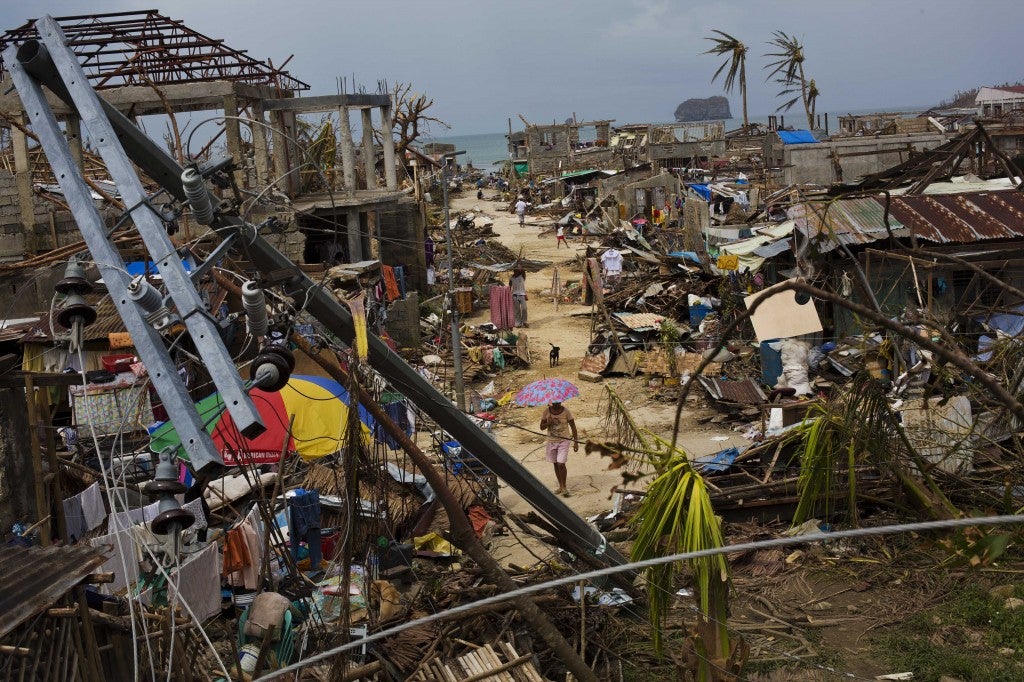 In this Nov. 14, 2013, file photo, Super Typhoon Yolanda survivors walk through ruins in the village of Maraboth in the Philippines. The impact of Yolanda on the Philippine economy was likely more moderate than initially expected, according to Moody’s Analytics, which expects the economy to have grown by 6.6 percent in the fourth quarter of 2013. AP PHOTO/DAVID GUTTENFELDER

Moody’s Analytics expects the Philippine economy to have grown by 6.6 percent in the fourth quarter of 2013, saying the impact of Super Typhoon “Yolanda” was likely more moderate than initially expected.

Should the think tank’s forecast prove correct, the economy’s full-year growth for 2013 settled at 7.2 percent, exceeding the government’s official target of between 6 and 7 percent.

The Philippine Statistical Authority (PSA), the newly created agency consolidating all the government’s statistics agencies into one, will announce the official gross domestic product (GDP) growth figure for 2013 on Thursday.

“We anticipate a modest economic impact in the fourth quarter of 2013 and the opening quarter of 2014, although we see few long-term implications as the structure of the Philippine economy remains sound and downside risks remain contained,” Moody’s Analytics said in its latest outlook report for Asia-Pacific economies.

“The GDP figures [for the third and fourth quarters of 2013] will provide the first solid reading of the typhoon’s impact—so far we have seen only the trade and industrial production data, which showed little reaction [to the natural calamity],” Moody’s Analytics said.

A 6.6-percent growth in the last quarter, however, would mark a deceleration from the average growth of 7.4 percent in the first three quarters of 2013. As of the third quarter, the Philippines was one of the fastest-growing economies in Asia.

Factors credited for the Philippine economy’s robust growth were household consumption, increase in government spending and higher investments by domestic firms. The last factor was attributed to improved business sentiment last year after the Philippines got its first investment grades from international credit-rating agencies.

However, following the devastation caused by “Yolanda” on central Philippines in November, concerns were raised that the domestic economy could slow down significantly in the fourth quarter.