Two ladies and a techie-laden firm 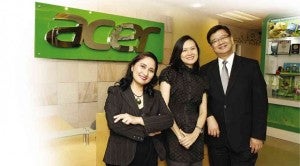 Organizations are only as strong and innovative as the people who run it and it’s the same tale with Acer Philippines, which remains a leader in the local PC and notebook computer market.

SundayBiz, in a recent interview, had the opportunity to gather insights from the top female executives of the Taiwanese technology multinational’s  Philippine unit, which is on its 11th year of operations as a fully-owned subsidiary.

And while both Agnes Neria-Espino, product marketing director, and Jennifer Teng-Chua, head of finance and administration, both occupy very different roles in the organization, the goal is the same, which is to translate the skills they have acquired in their long careers into making Acer Philippines the leader it is today.

There is no magic formula for corporate success, and as both executives continue to prove, it boils down to passion in the workplace while being able to balance their careers with life beyond the corner office.

For Teng-Chua, who has been with the company since 1999, even before its 2002 reorganization, this is achieved by finding the right job and environment.

Teng-Chua, a CPA who once dabbled and excelled in programming, said Acer Philippines is her sixth job, having worked her way through an accounting company and even a fitness firm.

“It’s the friendly culture of the company,” Teng-Chua says, referring to the relatively open work environment where employees need not be “too stiff.”  After all, being stiff was an attitude she gradually shifted from during her stay with the company.

Teng-Chua says this does not mean people at Acer are too lax either as there is the bottomline to watch. She says she takes this role seriously as the custodian of the company’s financial health.

“When I first joined Acer, I was very idealistic, I always wanted everything to be perfect,” she recounts.  “But I learned that sometimes you are just punishing yourself when the things you want are not always being followed.”

For Teng-Chua, resilience was also a key factor in her career given the added responsibilities given to her. Her role at the company includes overseeing the human resources division, which she believes helped her in fostering stronger ties with co-workers.

Neria-Espino came into the company in 2006 under a different set of circumstances but the challenges were no less present.

Acer Philippines was still lagging behind competitors at the time and the company had a great set of products but no proper marketing team nor system in place, she recalls.

“I was one of those brought in. For a company to grow further, you need to bring in new blood to be able to grow it even more. And that means good products and promotions, and you have to have the perfect marketing mix,” Neria-Espino says.

Prior to joining Acer, she was with Microwarehouse Inc., a distributor of networking and digital devices, where she handled eight brands.

But Neria-Espino, who obtained her MBA in 2006 but traces her educational and career roots to tourism, says she was drawn by the challenge of getting the company ahead of the competition.

“I joined Acer because I knew it was something similar to what I did and I wanted to be in a fast-paced industry. I also wanted a challenge,” she says.

She got what she bargained for, as the challenges are constant in the technology business, sometimes on a daily basis.

“For you to be able to meet or maintain that goal of being No. 1, you have to be able to come up with a good marketing plan that will thwart the moves of your competitors,” she says.

This is a skill honed mainly with experience and gut-feel, such as the proper time to launch products and choosing the right strategy to market them, she says.

The marketing veteran, who claims she was never a “techie,” nevertheless became a convert as it was part of truly understanding the market.

“Marketing is marketing—the projects are the same. It’s just the market the changes,” Neria-Espino adds, while absentmindedly fiddling with her Acer Z5 smartphone, which has yet to be launched commercially here.

While both executives have achieved much success, they also concede that they couldn’t have done it without teamwork—another crucial aspect in climbing the corporate ladder.

“I always know that without my staff, without the people under me, I will not be where I am now,” Teng-Chua says. “Some have left but I have a good finance team, good support.”

She says it is also important to help workers build up their confidence. This is achieved by designating important tasks and letting the person know that they have done a good job, if the situation calls for it.

“You have to let them realize that you have confidence in them. To appreciate what they do. It doesn’t have to be a tangible gift but a simple ‘thank you,’” she says.

Neria-Espino emphasizes teamwork is very essential in marketing as well.

“Marketing decisions are not made on the fly. It’s not because of only one factor. It comes from experience, being able to cooperate properly, meaning you’re part of a team.”

As noted, the key ingredient to making all these factors work is passion, within and beyond the job, and this is something these Acer ladies have in spades.

“If you are not passionate, you will just give minimum compliance, which unfortunately will not make you develop more,” says Neria-Espino. “I always say you have to be passionate, to always learn and learn.”