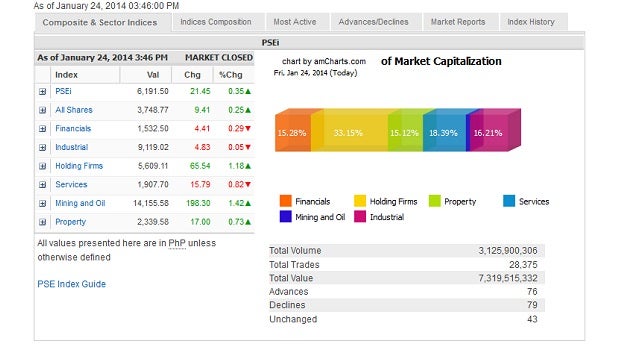 British bank Standard Chartered is upbeat on prospects for the Philippines, which it sees on track toward a faster growth trajectory especially if infrastructure bottlenecks are addressed.

Steve Brice, Stanchart’s chief investment strategist, said in a press briefing Friday that the country’s economic growth may rise to around eight percent in the next three to five years or even hit a growth of 10 percent in five years if infrastructure challenges are addressed.

Stanchart also prefers Philippine equities over bonds, especially as a likely monetary tightening by the second half of the year is seen resulting in capital depreciation for fixed-income assets. The bank is expecting the Bangko Sentral ng Pilipinas to jack up key interest rates by 50 basis points in the second semester of the 2014.

Globally, the British bank prefers equities over bonds but favor developed markets over emerging markets. Within Asia, Stanchart prefers North Asia, particularly South Korea, but among Southeast Asia’s emerging markets, its top pick is Malaysia while the Philippine is also among its top three favorites in the region.

“The structural re-rating of Philippine equities makes sense as growth has gone up from 4-5 percent to 6-7 percent, maybe reach 8 percent at some point in three to five years,” Brice said, noting a very positive environment.

Re-rating means that price valuations may change, such as from an upgrading of projected corporate earnings.

Brice said the valuation of Philippine equities had gone down to “reasonable” levels from recent highs although these were still not dirt-cheap.

Local stocks are trading at 17x projected earnings this year, higher than the historical price-to-earnings multiple of 15x but much lower than the more than 20x multiples seen last year when the index soared to all-time highs. The main-share Philippine Stock Exchange index (PSEi) peaked last year at around 7,400. It has since pulled back by 16.3 percent to close at 6,191 Friday.

Brice said the Philippine economy could grow by as much as 10 percent in five year’s time if infrastructure requirements were met. “Clearly, infrastructure is a major challenge and it’s true in much of the emerging markets in Asia,” he said.

This 2014, Brice said growth might ease to 6.7 percent but with some upside risks. “If you look at most areas–consumption, investment, government spending, exports, most of them look pretty healthy,” he said. The key uncertainty, he said, would be investment spending. By 2015, the bank expects Philippine growth to return to the 7-percent pace.

Inflation is seen accelerating modestly to average 3.9 percent this year, leading to interest rate increases in the second semester.

The global economic backdrop is seen more favorable this year, led by the United States. Stanchart thus prefers North Asia over Southeast Asia because the former is more exposed to the global growth cycle.

For 2014, Stanchart still favors developed markets over emerging markets despite the considerable decline in the latter’s price valuations, citing the start of the monetary tightening cycle in emerging markets.