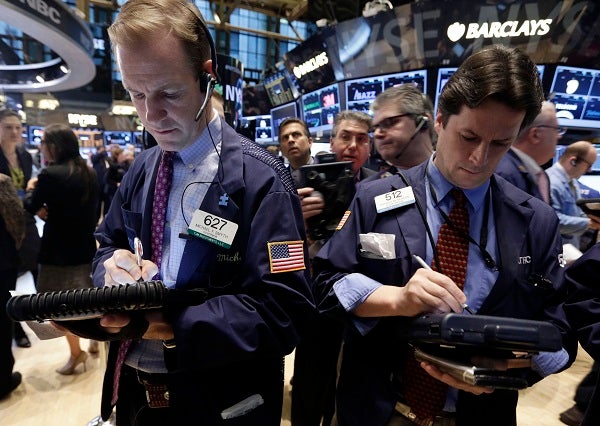 In this Jan. 17, 2014, file photo, traders Michael Smyth, left, and Patrick McKeon, work on the floor of the New York Stock Exchange. US stocks on Wednesday, Jan. 22, finished mixed as investors continued to react cautiously to a series of uneven earnings reports. AP PHOTO/RICHARD DREW

Companies are “not beating expectations by very much,” said Michael Gayed, chief investment strategist at Pension Partners. The results are “not very satisfying,” he said.

Before releasing their fourth-quarter reports, an unusually large number of companies warned of poor earnings, according to a report by S&P Capital IQ.

Of the 100 companies to give a fourth-quarter outlook, 80 were negative, 10 were positive and 10 were in line, said the report. The ratio of negative-to-higher forecasts is higher than the 15-year average, S&P Capital IQ said.

Dow component IBM fell 3.3 percent after revenues of $27.7 billion fell short of the $28.3 billion forecast by analysts. The company blamed poor results in its hardware division and in emerging economies, especially China.

Apple rose 0.4 percent after activist investor Carl Icahn disclosed that he had increased his investment in the iPhone maker by $500 million. Icahn said Apple is “doing great disservice to shareholders by not having markedly increased its buyback.”

Handbag and accessory retailer Coach fell 6.0 percent after earnings of $1.06 per share missed expectations by five cents on “substantially lower traffic” in North America. On the positive side, China sales “remained resilient,” the company said.

BlackBerry rose 8.6 percent on reports that the US Department of Defense planned to use BlackBerry devices on its new wireless network.

Bond prices fell. The yield on the 10-year US Treasury rose to 2.86 percent from 2.83 percent, while the 30-year increased to 3.76 percent from 3.74 percent. Bond prices and yields move inversely.