MANILA, Philippines—The launch of the first of two private sector-led elevated expressways linking northern and southern Metro Manila was held on Wednesday, marking the formal start of a major infrastructure project aimed at easing traffic jams in the metropolis.

The project, dubbed the Metro Manila Skyway Stage 3, is led by conglomerate San Miguel Corp. and Indonesia’s Citra Group, which was also behind the original Skyway project in the Southern part of the capital district.

The 14.8-kilometer, six-lane elevated expressway, will run from Buendia, Makati City, to Balintawak, Quezon City, and will cut travel time from more than an hour-and-a-half to about 15 minutes.

The toll-road is expected to be fully completed in April 2017, but government officials and San Miguel president Ramon Ang hinted that it could be finished a year ahead of schedule.

“There is a proposed accelerated plan. Highly critical here is right-of-way,” Transportation and Communication Secretary Joseph Abaya said after the launch ceremonies, where President Aquino was also present. “If things fall into place and right-of-way is acquired without problems, then we can get it done by June 2016.” Abaya was referring to the time when President Aquino steps down.

Another connector toll road linking North Luzon Expressway and South Luzon Expressway that is being pursued by Manuel V. Pangilinan-led Metro Pacific Investments also expects to complete its project by June 2016 after construction begins in July this year.

President Aquino, in his speech to guests comprised of officials from the Department of Transportation and Communications and the Department of Public Works and Highways as well as businessmen involved with the project, noted that the Skyway Stage 3 would create 6,000 direct jobs as well as 10,000 to 12,000 indirect jobs during its construction period.

“Once completed, the [Skyway Stage 3] will reduce traffic at Edsa and other primary roads in Metro Manila because of the addition of an alternative highway linking southern and northern Luzon,” Aquino said in Filipino.

He noted that roads would be about less dense by an estimated 55,000 vehicles daily.

“Given the state of traffic in Metro Manila, both the public and private sector have been looking for ways to ease the gridlock and we believe that this project is a step in the right direction. The connector road will go a long way in helping solve our traffic problems,” Ang said in a speech.

Apart from Edsa, reduced traffic would be felt in C-5 and Central Manila, Citra said. Nevertheless, the company noted that traffic during construction would worsen traffic for motorists.

The group noted that necessary safety devices would be deployed together with an adequate number of traffic personnel. Moreover, traffic re-routing and counterflow systems would be implemented, when needed, it said.

Skyway Stage 3 will start at the end of the existing Skyway Stage 1in Buendia, run through the length of Osmeña Highway, Quirino Avenue, Paco, Sta. Mesa via the Nagtahan flyovers, traverse Aurora Blvd and Araneta Ave. up to Sgt Rivera Road and end at the bend of A Bonifacio Ave. towards NLEX. 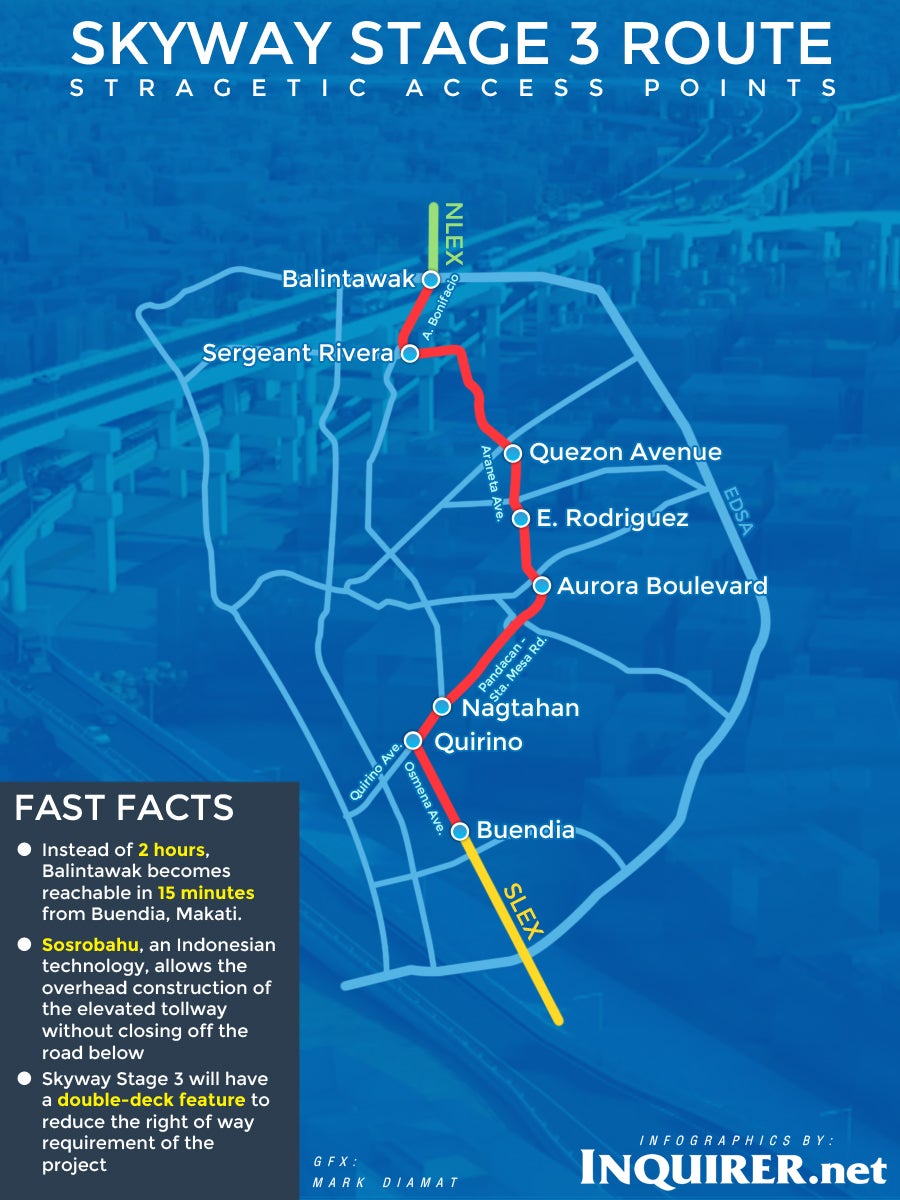