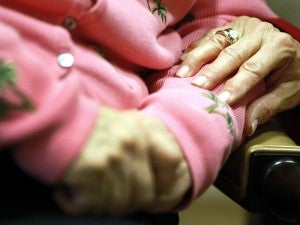 Alexis McKenzie, right, executive director of The Methodist Home of the District of Columbia Forest Side, an Alzheimer’s assisted-living facility in Washington, puts her hand on the arm of a resident. In a study published by the Journal of the American Medical Association on Tuesday, Dec. 31, 2013, researchers report that vitamin E might slow the progression of mild to moderate Alzheimer’s disease. AP FILE PHOTO

It’s one of the most “heart-breaking” diseases of the elderly, for it destroys a human being’s most valued treasures: memories, or the ability to remember.

Alzheimer’s disease is a common type of dementia, or decline in intellectual function. The disease affects not only the elderly, but even an individual in his or her 40s.

The disease was first identified in 1906 by German neurologist Alois Alzheimer. It is characterized by progressive mental deterioration to such a degree that it interferes with one’s ability to function socially and at work. Memory and abstract thought processes are impaired, if not totally erased.

Alzheimer’s disease is an irreversible, progressive disorder. Deterioration in critical areas of the brain may precede symptoms by as much as 20 to 40 years. As Alzheimer’s disease progresses, there is severe memory loss, particularly short-term memory.

1 Keeping the brain busy may help slow down the progression of the disease. Balch said that this means keeping physically active and intellectually involved.

2 Physical exercise could play an essential role in preventing Alzheimer’s. Robbins wrote that the value of exercise in sustaining healthy cognitive function was demonstrated in a five-year study published in the Archives of Neurology in March 2001.

“The study found that people with the highest activity levels were only half as likely as inactive people to develop Alzheimer’s and were also substantially less likely to suffer any other form of dementia or mental impairment,” Robbins said.

Robbins added that even those who engaged in light or moderate exercise had significant reduction in their risk for Alzheimer’s and other forms of mental decline. The study concluded that the more people exercise, the healthier their brains remain as they grow older.

3 Being on a balanced diet of natural foods keeps the disease at bay. Balch offers a supplementation program in her book.

Robbins cited the Abkhasians, Vilcabambans, Hunzans, and elder Okinawans, who eat whole-foods, plant-based diets high in antioxidants. “This is now known to be one of the key reasons they have such extraordinarily low rates of Alzheimer’s and other forms of dementia.” He added that antioxidants are “extraordinarily important when it comes to preventing Alzheimer’s disease and other forms of senility and cognitive decline.”

Antioxidants are found in fresh vegetables, whole grains, fresh fruits and legumes such as soy. Carotenoids, the substances in fruits and vegetables that give their deep, rich colors, are antioxidants. Vitamin C and E are also antixoidants, as are the minerals magnesium and zinc.

4 Long-term exposure to lead and other heavy metals have been linked to the increased risk of developing Alzheimer’s.

Pitchford added that many weakened conditions are linked to toxic metals. He added that people who live in industrialized parts of the world usually pick up toxic amounts of metallic elements from the air, water and food supplies.

“The most common are lead, arsenic, cadmium, aluminum, mercury (also absorbed from silver-amalgam tooth fillings). These toxins can remain in the body an entire lifetime, wreaking havoc with all metabolic systems until removed,” he said.

It has been suspected that an accumulation of excess aluminum may contribute to Alzheimer’s. Pitchford observed that the metal could be absorbed from aluminum cookware and from drinking water (aluminum sulfate is frequently used to filter municipal water and often is not completely removed). Baking powder and antacids are two other common sources.

The following remedies, if used in the diet 4 to 6 times a week for 6 months, efficiently removes toxic metals. For prevention of toxic metal buildup these remedies may be included in the diet periodically:

• Seaweeds or algin (a gelatinous derivative of kelp or other seaweed, also available as a nutritional supplement)