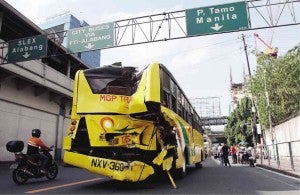 MANILA, Philippines—The Land Transportation Franchising and Regulatory Board (LTFRB) has issued a preventive suspension order on all 18 units of the MGP Trans bus company after one of its buses figured in a fatal accident last November.

According to a press statement from the LTFRB, the accident occurred at about 6:40 a.m. last Nov. 14, when an Elena Liner Bus rammed into an MGP bus in a bus stop along Edsa-Magallanes, leaving five passengers dead and more than 30 injured.

The MGP bus that was rear-ended by the Elena bus was operating without a valid permit, the LTFRB said.

LTFRB Chair Winston Ginez said MGP Trans committed a serious violation of its certificate for public conveyance (CPC) permit and faced the cancellation or revocation of its franchise.

A public hearing has been set for Jan. 21 during which MGP Trans will be asked to show cause why its CPCs should not be suspended, canceled or revoked for failing to comply with an LTFRB order on phased-out units.

According to information obtained by the LTFRB, the MGP Trans bus that was involved in the accident was a phased-out model 1991 unit and was last confirmed by the board in 2012.

Records from the Philippine Accident Managers Inc. (PAMI), the management company of one of the accredited insurance groups under the board’s passenger accident program, showed that the unit was last insured in 2012. Its passenger accident liability insurance coverage was not renewed by the bus company in 2013.

“This is a clear violation of our anti-colorum campaign. We will make sure that MGP Trans is meted [out] the penalty prescribed by the board and the government,” Ginez said.