First in PH: Woman gets new intestines with transplant 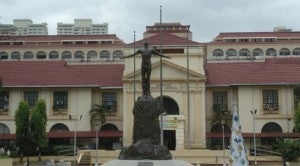 For Joseph Pasana, the offer to have an intestinal transplant performed on his ailing wife was like a ray of sunshine in the dark and dreary charity ward of the Philippine General Hospital (PGH).

“It was a blessing for my family at a time when most of the doctors believed her chance of survival was dim,” Pasana, 43, said in an interview.

His wife Raquel, 44, who lost the use of her intestines because of a medical condition known as intussusception, got a new lease on life after becoming the recipient of the first intestinal transplant in the Philippines performed by a team of Filipino doctors last month.

The local medical community considers the procedure performed on Raquel Pasana a groundbreaking event for the chronically underfunded state-run PGH.

The team led by Dr. Siegfredo Paloyo, who finished his two-year fellowship on multiorgan transplant at Miami Transplant Institute in Florida in the United States last year, performed the operation last Dec. 6.

Paloyo, 40, said the transplant team labored for six long hours to implant the entire length of the small intestines obtained from a 23-year-old brain-dead donor into Pasana.

Two weeks after the transplant operation, Pasana has begun to eat on her own and is on the way to full recovery, Paloyo said.

According to Paloyo, in the Philippines, an intestinal transplant is the best medical option for patients who have lost most of their small bowel, unlike in developed countries like the US where patients suffering from the same illness have the medical insurance to cover a course of intravenous treatment called the total parenteral nutrition (TPN).

This form of intravenous treatment, in which nutrients are dripped through a needle or catheter placed in the vein, is resorted to when patients cannot use their gastrointestinal tract for nutrition.

“Our patient who is confined in a charity ward obviously had no means for that. That is why we offered her the intestinal transplant,” Paloyo said.

Joseph Pasana has been unable to find regular employment since quitting his job as a supervisor for a construction company in 2000.

“We have had such unbelievably bad luck. We have been dogged by successive misfortunes,” said Pasana, an architect who has found himself working as an electrician and painter to support his family.

The worst came when Raquel was afflicted with the abdominal disorder in 2011. “We thought it was just anorexia (nervosa) because she began losing weight and constantly vomiting the food she was taking in,” he said.

In 2012, Raquel was admitted to the PGH and was diagnosed with a disorder called gastroesophageal reflux disease, or GERD.

“She recovered after a week of treatment. She even gained weight in the next few weeks and months,” Joseph said.

But in mid-October, Raquel had to be rushed to the hospital after she collapsed and began to defecate blood.

Almost her entire intestine had to be surgically removed, causing her to depend on TPN for sustenance.

Paloyo explained that Raquel had lost the entire length of her small intestines when the upper half of her intestines were “swallowed” by the lower half, a medical condition called small-bowel intussusception.

Because of this, she was unable to absorb nutrients from food taken by mouth and had to be sustained by intravenous nutrition, which Paloyo said was both expensive and incompatible with long-term survival.

“I felt dizzy after I was told about the cost of the TPN and that it was the only way for her to live. But  I never thought of giving up. If I had to sell all the things we owned, I would do it to extend her life,” Joseph said.

But he said he found hope when Paloyo approached him and offered him the transplant. “Our days brightened up every time he (Paloyo) updated us on the transplant,” he said.

Palayo said solid organ transplantation was routinely done in the Philippines, but only involving the kidneys. There has been no attempt to do intestinal transplantation until last month, he said.

Even in the US, multiorgan transplantation is rarely done, with only a few medical centers offering it, he said.

Thus, when PGH Director Jose Gonzales and Department of Surgery Chair Wilma Baltazar learned about the Palayo team’s plan, they did not not hesitate to give their full support.

Since the projected expenses for the procedure was “beyond the reach of Pasana,” Paloyo said the PGH Department of Social Service pooled donors from the “I am PGH—a Person Giving Hope” campaign—the Philippine Charity Sweepstakes Office and many anonymous “Good Samaritans” to fund the project.

“This is a big collaborative effort among individuals and groups. Imagine, we were able to do this at PGH, with the bureaucracy and all,” he said.

Fresenius-Kabi, a health-care company, generously donated the TPN to prepare Raquel and maintain her health before the surgery.

The Human Organ Preservation Effort (HOPE) team, and the Philippine Network for Organ Sharing (Philnos) helped the team “procure (or harvest)” the small intestines from the deceased donor.

To prevent her body from rejecting the new organ, Raquel was given medications “to suppress her immune system” and allow her body to adjust to the new organ.

She had to be isolated since the next challenge for the doctors was to enable the transplanted intestines to function and prevent rejection and infections, Paloyo said.

Raquel stayed in the surgical intensive care unit for two weeks following the surgery before her new intestines became functional and she was allowed to start eating small servings of liquids and low-residue food.

“Hopefully, we will do this again when the need arises,” Paloyo said, noting that the procedure could be done on indigent patients at the PGH with similar medical conditions.

Diabetes is incurable but can be managed